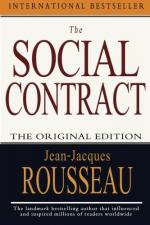 This detailed literature summary also contains Topics for Discussion and a Free Quiz on The Social Contract by Jean-Jacques Rousseau.

The Social Contract is an extensive, intellectual contemplation and examination on the nature and function of government. Historical examples as well as ones contemporary to the time at which the book was written (the mid 1760s) are cited in support of the author's many arguments, which all essentially boil down to three main ideological, and therefore thematic, statements. These statements are that the will of the people is infallible, that the sole function of government (and the men who populate it) is to enact that will, and that government must adapt to whatever form is necessary to do so effectively and with integrity.

The Social Contract is a systematic exploration of the relationship between the individual and the government under which he lives. That exploration begins, in Book 1, with an analysis of the informal, basic kinds of government throughout history, which the author contends was founded on the patriarchal principle of rule by the right of strength. Rousseau details the various reasons this principle is ineffective and ultimately harmful to the overall well-being of humanity, and begins a discussion of more effective forms of government. His essential contention is that good government is ultimately good for the individual, in the way that its rules and laws ultimately and effectively provide freedom for the individual to fulfill his own needs and desires. Development of this idea leads into Book 2, a more detailed analysis of the benefits of good government.

Book 2's essential focus is to diagram how the will of the individual can, through a process of communication and implementation, expand upward and outward, ultimately manifesting in the will of the state as defined by, and shaped into, law. Book 2 concludes with an examination of the different kinds of laws, the different reasons for their needing to be enacted, and the roles of various individuals / levels of government in enabling that process. This in turn leads into Book 3, a more detailed exploration of government— different kinds of government, different ways in which they work, pros and cons of each kind, and the specifically defined responsibilities of individuals within the governmental system. There is also, in this book, an extensive contemplation of both why and how good government must be preserved.

The focus of Book 4 is an even deeper examination of the ways and means good government can, and should, be constantly monitored and refined. The author suggests here that there are two key aspects to this process: the first is the way in which votes are taken and tallied, the second is the way in which specific individuals fulfill specific, carefully defined and limited functions, addressing specific circumstances in particular ways. Also in Book 4, the author goes into specific detail about the way in which the government of Ancient Rome was developed, a government he holds up as a kind of model, or example, of how good government should work. The author concludes both this book and the book as a whole with an extensive argument against the involvement of religion in general, and Christianity in particular, in government.