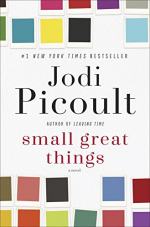 Jodi Picoult
This Study Guide consists of approximately 60 pages of chapter summaries, quotes, character analysis, themes, and more - everything you need to sharpen your knowledge of Small Great Things.

Ruth Jackson grew up in a poor part of the city, and her mother worked as a maid for the Hallowells, a wealthy white family in Manhattan. As a child, Ruth showed a high level of intelligence and earned a spot at an elite school. Her mother taught Ruth about the importance of appearances, and Ruth spends most of her life struggling to fit into a white-dominated world and profession.

As a child, Ruth and her sister Adisa occasionally went with their mother to the Hallowell home. They sometimes played with the daughter of the family, Christina. There, Ruth learned more about the division between the races though as an adult, she realized that at least some of those issues were of her own making. One day, the three children were present when Mrs. Mina Hallowell went into early labor and gave birth to a son with only Ruth's mother to help her. Ruth noted that the three children witnessed the event, and each had a different reaction. Christina had her child through a surrogate mother; Rachel had five children; and, Ruth became a labor and delivery nurse.

Ruth is the only black nurse in her department when Brittany Bauer gives birth to a son she names Davis. She and her husband, Turk, are skinheads and do not bother to hide their prejudice. Ruth takes care of Davis for only a few minutes before Turk objects and the supervisor removes Ruth from the case. Ruth is understandably angry but obeys the demand. A couple of days later, a pediatrician performs a circumcision on Davis. Nurses must observe infants following the procedure, but the nurse assigned to Davis' case is called away for an emergency C-section. Policy requires that the supervisor help with transporting the patient to the emergency room, meaning that Ruth is literally the only nurse available to watch Davis.

She steps into the nursery where the infant is sleeping to monitor him, keeping in mind that she has been told not to touch him. When Davis stops breathing, Ruth goes against those orders, trying the minor steps that sometimes start an infant breathing again. Those steps have no effect, and the supervisor arrives at that moment. She asks what Ruth is doing, and Ruth answers that she is not doing anything. The medical staff does everything possible, but the baby dies.

Turk files a complaint with the police and an investigation ensues. Ruth had worried that she would lose her job because she took action, but it then appears that she might be put in prison because she said she had done nothing. As she prepares for trial, she connects with a public defender named Kennedy McQuarrie. Kennedy is white and believes that she has no prejudices. She and Ruth have a connection that borders on friendship as Kennedy learns what everyday life is like for Ruth and Kennedy discovers that she - like most people - does have some prejudices. In Kennedy's case, she goes overboard trying to seem unbiased.

Ignoring all her basic rules in a trial of this nature, Kennedy allows Ruth to take the stand to tell her own version of events and she then talks at length about race and prejudice. Ruth also tells the truth - that she had taken action when Davis stopped breathing, though she was told not to touch the infant. When Kennedy presents evidence that Davis died because of complications related to his mother's gestational diabetes, the jury becomes irrevocably hung and the judge grants Kennedy's motion to dismiss all charges.

Years pass. Ruth becomes a nurse practitioner; Brittany commits suicide. Turk realizes that his hatred has no purpose in his life. He becomes a speaker, talking against the hate that rules so many people and events. He marries, takes his wife's last name to distance himself from his past, and has a daughter. One day, he arrives at a clinic, and Ruth takes care of his daughter. He is not certain if she recognizes him, but he is happy to see that she is thriving after the ordeal.