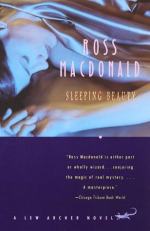 Lew Archer is a private detective who inadvertently becomes involved in the disappearance of a member of a very prominent family. A chance encounter with Laurel Russo, daughter of Jack Lennox who runs the wealthy Lennox oil company, leads to Laurel's disappearance and the resulting investigation uncovers a web of lies and cover-ups. Archer's involvement with the Lennox family becomes more than just that of private detective working an investigation. By the end of the book it appears that Archer has become just as enmeshed in the Lennox family problems as if he were an actual Lennox.

Lew Archer returns home from another job to see that the coast of his town is covered by an oil spill. When he walks down to the beach to view the spill closer he meets a distraught woman trying to clean up an oil-covered bird. Lew also sees two suspicious looking men at a nearby restaurant and makes a mental note of them. Another walk down the beach brings Archer back to the woman who has failed to save the oil-covered bird. A brief conversation results and Archer ends up taking the woman back to his apartment with him. The act seems innocent enough since she just wants to use the phone to contact her husband but when the woman abruptly leaves Archer's apartment he becomes suspicious.

Archer discovers that the woman, whose name is Laurel Russo, took a vial of Nembutal sleeping tablets from his medicine cabinet. The private detective becomes concerned about Laurel's welfare and goes after her but she has disappeared. There is nothing stating that Archer should become involved in the search for the woman or suspect that she did anything besides catch a cab and return home, but the private detective cannot let the matter go. Archer begins to investigate the woman's disappearance and becomes embroiled in a situation that even he would not have suspected.

Laurel Russo is the daughter of Jack Lennox who stands to inherit the Lennox oil company and become one of the wealthiest men in California. As Archer investigates Laurel's possible whereabouts he discovers that the Lennox family is hiding a series of family secrets. Jack Lennox is behind his daughter's disappearance. Jack is trying to keep Harold Sherry from divulging personal information and uses his daughter's disappearance as a means of furthering his own cause. Jack offers Harold Sherry a hundred thousand dollars to keep quiet but tries to kill Harold at the scheduled ransom drop. Harold manages to make off with the money and it still appears that he is responsible for Laurel's kidnapping.

Jack is unable to keep his personal information hidden from public knowledge. Archer learns that Jack's wife, Marian, killed Laurel Russo's mother-in-law twenty-five years ago because Jack was having an affair with the woman. Archer also uncovers the truth about a fire on board the ship, Canaan Sound. Jack tries to kill Nelson Bagley who saw Marian shoot Allison Russo but instead a spark from the gun ignites a gas leak and burns the whole ship. As it turns out Allison Russo used to baby-sit Laurel and that is how Allison's son, Tom, first met his future wife. The entire situation is a complicated and disgusting mess. In the end Marian kills herself, Jack inherits the family business, and Laurel returns safely to her parents home. After the lengthy build up of interconnected family secrets, the reader is left with a quick and unfulfilling resolution. Over the course of the book the reader notices that Archer becomes personally involved and feels that this involvement may have affected the final outcome of Laurel's investigation.