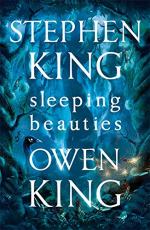 This detailed literature summary also contains Quotes and a Free Quiz on Sleeping Beauties by King, Owen and King, Stephen.

Sleeping Beauties by Stephen King and Owen King illustrates that life, even at its best, is no fairy tale. When women all over the world began growing a cocoon-like structure around themselves when they go to sleep there was widespread panic because the disease appeared to have no cause and no cure. Named after the princess in Sleeping Beauty, the Aurora Flu threatened to wipe out the human species if it continued. The men of Dooling prepared for war when they learned a strange woman being held for murder at the Dooling Correctional Facility for Women was able to sleep and wake normally. This woman, who appeared to be part goddess and part witch, told Clint Norcross, the acting warden, the only way to cure the disease was for him to keep her alive even as the angry masses tried to take her and kill her.

Evie Black appeared in Dooling the same day that women began growing cocoons when they fell asleep. She killed drug dealer Truman Mayweather and his friend, and then set fire to the shed where he produced meth, a highly addictive drug. His girlfriend, Tiffany Jones, called in the double homicide and fire to the sheriff’s department. Lila Norcross, Dooling’s sheriff, was surprised to see Evie standing in the road as if she were waiting to be arrested for her crimes. Evie called Lila by name and asked her about her relationship with Clint, her husband. Lila was disturbed by Evie’s comments because she had just begun to suspect that Clint had a child with another woman, a child who was about the same age as Lila and Clint’s own son.

Meanwhile, people in Dooling begin to panic as more and more women fall asleep. Scientists are able to find no cause for the disease much less a vaccine or cure. Women whose cocoons are torn open by people trying to wake them become violent, often killing people. A man pretending to be a doctor posts on the Internet that the cocoon material that surrounds the women is responsible for spreading the disease. He tells people that they must burn all of the cocoons, and the women in them, in order to stop the disease spreading. Although real scientists and doctors try to prove this report is false, men calling themselves Blowtorch Brigades begin rounding up cocooned women in order to burn them.

After the prison warden went to sleep and the assistant warden abandoned his post, Clint who was the prison psychiatrist, found himself in charge of the prison. Clint discovered that Evie was the only woman in the world who appeared to be able to sleep and wake normally. He tried to keep news of her immunity to the Aurora Flu contained to the prison but was unable to do so. Soon, a posse of men led by Frank Geary, a man known for having anger issues, tried to persuade Clint to release Evie to them. They believed she held the key to a cure for the illness.

Clint, meanwhile, had come to realize that Evie was not just a woman but a supernatural creature with unusual abilities. She told Clint that the women put to sleep by the Aurora Flu had woken in an alternative reality where they were living happily free of men. The only cure for the disease was to persuade the women to come back to Dooling. In order to persuade the women, Evie told Clint that he could not let the band of men coming to attack the jail kill her. In the melee that follows, Evie appears to be trying to goad on Frank and the men in opposition to Clint, as if she is trying to get them to prove that the only way men know how to solve a problem is with violence. Clint, however, turned the tables on Evie when a man suddenly died of a heart attack in the last moments of the fight. Clint convinced Evie to bring the man back to life, an ability that proved to Frank and the others that Evie really did have special abilities.

To Evie’s surprise, all of the women voted to go back to their men, mostly because some of them had male children they did not want to be left alone. They went back to lives that had holes in them after the loss of men in the battle over Evie. It was the women who cleaned up the mess the men had made while the women were gone. Regardless, all of the men and women alike were resolved to live their lives in a better way.