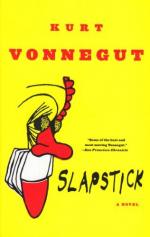 Slapstick: Or, Lonesome No More! Topics for Discussion

Kurt Vonnegut
This Study Guide consists of approximately 48 pages of chapter summaries, quotes, character analysis, themes, and more - everything you need to sharpen your knowledge of Slapstick.

The author reveals his state of mind and some events and characters in his life when he wrote "Slapstick". What were some of the major influences that appeared in the book?

In what ways does the story reflect the comedy term "Slapstick", the main title of the book?

Loneliness is a major theme in the novel. How has Wilbur been affected by loneliness, and how has he combated it?

Wilbur and Eliza consider themselves two halves of one genius. What does each character contribute to this whole identity? How are they different?

Wilbur admits he is incapable of love and only sincerely expresses it once, to his sister. Why does Wilbur lack emotion while Eliza is capable of expressing anger, hurt, and other emotions?

After civilization collapses, in what ways do survivors create order in a chaotic world?

What structures or items in the...

More summaries and resources for teaching or studying Slapstick: Or, Lonesome No More!.

Slapstick: Or, Lonesome No More! from BookRags. (c)2023 BookRags, Inc. All rights reserved.