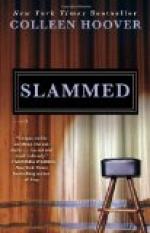 Colleen Hoover
This Study Guide consists of approximately 24 pages of chapter summaries, quotes, character analysis, themes, and more - everything you need to sharpen your knowledge of Slammed: A Novel.

This detailed literature summary also contains Topics for Discussion on Slammed: A Novel by Colleen Hoover.

Slammed is a young adult novel written by Colleen Hoover, and is about the struggle of eighteen year-old Layken Cohen to deal with her mother's terminal cancer, and her love for Will Cooper, her English teacher and neighbor.

When the novel begins, Layken's father has been dead for six months, having died of a heart attack. Julia, Layken's mother, and Kel, Layken's younger brother, move to Julia's hometown in Michigan since they can no longer afford to live in Texas, and so Julia can take a better job. Kel at once befriends Caulder, who lives with his older brother, Will, across the street. Will and Layken hit it off immediately -only later to discover that Will is Layken's teacher. While Layken pushes ahead with their relationship, Will tries to hold it off. He is twenty-one, and graduating from college early. His parents were killed a few years before in an auto accident, and Will has been taking care of his brother since. He has a lot to lose.

All the while, Will teaches Layken about life, as does Layken's mother - who is actually dying of cancer, having moved to Michigan to be near a specialist. Will also teaches Layken about poetry, and about how poetry can be therapeutic and important. Eventually, Layken's mother tells her to go after Will, and to think with her heart instead of her head. Layken does so. When the novel ends, she and Will have been dating for more than a year, and Layken's mother has passed on. But her mother leaves a note for her and her brother, telling them to keep on living, and signing it with her love.

More summaries and resources for teaching or studying Slammed: A Novel.

Slammed: A Novel from Gale. ©2005-2006 Thomson Gale, a part of the Thomson Corporation. All rights reserved.