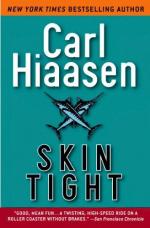 Carl Hiaasen
This Study Guide consists of approximately 46 pages of chapter summaries, quotes, character analysis, themes, and more - everything you need to sharpen your knowledge of Skin Tight.

This detailed literature summary also contains Topics for Discussion and a Free Quiz on Skin Tight by Carl Hiaasen.

The tranquil life led by Mick Stranahan on his stilt house in the tidal flats of Biscayne Bay is rudely shattered when a man, pretending to be his friend Tim Gavigan, drives up with a speedboat and attempts to shoot him. Mick Stranahan defends himself with a trophy Marlin's spike from the wall of his house and fatally stabs his assailant in the chest. Then, Stranahan, who is retired from being an investigator for the State Attorney Office, goes in search of the person or persons who are trying to get him killed.

Stranahan starts his inquiries with the case of a young woman who, four years ago, disappeared after having cosmetic surgery at a Miami clinic. The owner operator of that clinic was a Doctor Rudy Graveline, who has reopened an even bigger clinic called the Whispering Palms Clinic. Stranahan soon learns that it is Rudy Graveline who is trying to have him killed. Apparently Graveline is being blackmailed by a nurse who was working for him when the young woman disappeared but the Doctor thinks Stranahan is the blackmailer. Dr. Graveline is also being investigated by a TV reporter and his crew who intend to expose him on the show "In Your Face." Stranahan and the TV show's producer, Christina Marks, join forces to find the nurse, Maggie Gonzalez. Meanwhile Dr Graveline has hired a man called Chemo to kill Stranahan but who fails in two attempts. The first time is when he torches the wrong stilt house and at the same time murders Stranahan's ex wife by drowning her, and the second time when he only wounds Stranahan in the shoulder but loses his own hand to a large barracuda when he falls into the water.

On learning that Chemo has not carried out his instructions to kill the blackmailing nurse, Graveline bribes two homicide detectives to arrest Stranahan for murdering his ex wife and to shoot him under pretext of resisting arrest. Warned of this, Mick Stranahan and Christina Marks hide out in a remote key in Biscayne Bay and when the two homicide detectives turn up they perish in a boating accident engineered by Stranahan, without the knowledge of Christina. By now Mick and Christina have consummated their love affair but, almost immediately, split up because Christina thinks Mick is excluding her from his life.

Back on the mainland, Dr. Graveline performs surgery on the TV reporter who is trying to expose him, but in doing so kills him with a botched liposuction procedure. At the same time, Chemo kidnaps Christina Marks in an effort to get Stranahan to come to meet him, but Stranahan reciprocates by taking the film star, with whom Rudy Graveline is besotted, back to the stilt house and invites all the characters to meet up there.

In a climactic final scene, all the women are set free in a rental boat into the bay and on the stilt house, Dr. Rudy Graveline is killed by Chemo during the reenactment of a rhinoplastic procedure, which Stranahan arranges in an effort to get the Doctor to confess. Chemo cannot escape from the stilt house because he is convinced that, if he swims away, the giant barracuda will get him, and Mick Stranahan disappears and is nowhere to be seen when the police arrive to arrest Chemo for the murders of Stranahan's ex wife and Dr. Graveline.

More summaries and resources for teaching or studying Skin Tight.