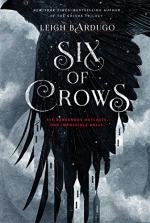 Leigh Bardugo
This Study Guide consists of approximately 72 pages of chapter summaries, quotes, character analysis, themes, and more - everything you need to sharpen your knowledge of Six of Crows.

This detailed literature summary also contains Quotes and a Free Quiz on Six of Crows by Leigh Bardugo.

The following version of this novel was used to create this study guide: Bardugo, Leigh. Six of Crows. Henry Holt and Company. 2015. Hardcover.

A guard named Joost witnesses the use of a drug called Jurda parem on a Grisha healer. Under its effects, she is able to control the minds of everyone around her and forces Joost and the other guards to wait forever.

Meanwhile, Kaz Brekker, Jesper, and Bolliger meet a member of the Black Tips, Geels, who demands more land from the Dregs for his own gang. Kaz disagrees and reveals that he has control of the snipe on the rooftop. Kaz’s Wraith, Inej, takes down the second sniper as the first shoots Bolliger as a traitor to the Dregs. Kaz tells Geels to leave and returns to the Dreg’s part of the Barrel himself. After a quick conversation with Inej, Kaz is drugged and taken to the home of Van Eck. There, he learns about jurda parem and is promised 30 million kruge to save the creator of the drug, Yul-Bayur, from the impenetrable Ice Court.

Kaz returns to the slat and talks to Per Haskell about the meeting with the Black Tips. He then mentions the job to Inej, promising four million kruge should it succeed. Afterward, he walks by the Emerald Palace belonging to his nemesis, Pekka Rollins, before meeting a Grisha Heartrender, Nina. He tells her about the job and she refuses until he tells her that they are going to free Matthias from Hellgate. She is furious, as she has been asking for over a year, but agrees to help.

Nina, Kaz, Inej, and a man named Muzzan all travel to Hellgate. Once there, they watch Matthias participate in the Hellshow where he is forced to kill three wolves for better living conditions. They sneak into his cell and Nina uses her powers to replicate Matthias’ injuries on Muzzen and make him look like he has firepox. When Matthias wakes up, he tackles Nina. Kaz separates them and they escape as Jesper releases the animals.

Back in Ketterdam, Matthias says they have no hope of breaking into the Ice Court, but Kaz offers him a pardon so he can return to Fjerda a free man. He then introduces their demolitionist expert and Van Ecks son, Wylan, explaining that they will use him as a hostage to get their money. Nina says that there will be a party in the Ice Court to celebrate Hringkalla and Kaz says they will enter through the prison. On the way out, however, their boat is blown up by Black Tips and Inej is stabbed.

Kaz gets her to the boat and asks Nina to heal her while he interrogates one of the Black Tips and learns that Rollins paid them to blow up the boat. Nina struggles to heal Inej as she did not train as a traditional healer. Once she is done, Nina tells Matthias that she tried to free him, but he still hates her. Later, Kaz tells the others that Inej is going to climb the incinerator shaft to help with their escape. Inej wakes up and Kaz ends up telling her that Rollins killed his brother, Jordie. It is revealed that the two were swindled out of their savings by a man named Hertzoon.

The group arrives in Fjerda and Kaz tells them the full plan. It is revealed that Nina once saved Matthias after a shipwreck and the two survived three weeks in the cold together. They come across a pyre with three Grisha. Matthias and Nina argue over Fjerda’s prejudice toward Grisha and Nina storms away. The group catches up to her as they are attacked by Grisha under the effects of jurda parem. They kill them, but Matthias and Nina debate if they should kill Yul-Bayur to keep the drug from reaching the wider world.

The group arrives in Djerholm and swap themselves out with prisoners on a wagon. However, Kaz passes out and remembers the day when Jordie died of firepox. Kaz was forced to use his body to swim back to Ketterdam after being thrown out with the other corpses. They arrive at the prison and Jesper creates lockpicks, revealing himself to be a Fabrikator. Kaz opens the lock as Jesper knocks the prisoners out. Matthias and Jesper leave to find rope while Kaz frees the women and searches the upper cells with Nina. During this time, Inej struggles to climb the warm incinerator but is saved by the rain and makes her way to the top.

Meanwhile, Kaz finds Pekka Rollins in a prison cell. He then returns to the group and they all make it to the roof. Unfortunately, they have to rethink their plan as Nina accidentally triggered an alarm while looking for Kaz. Inej and Nina enter with Inej’s old pleasure house, the Menagerie, but Inej is detained. Meanwhile, Kaz and Matthias travel over an ice bridge and steal the uniforms of two drüskelle. Matthias decides not to kill Kaz and they sneak into the party. Jesper and Wylan work to open one of the gates and trigger a Black Protocol while Nina finds Jarl Brum, the drüskelle leader whom she thought died in the shipwreck.

Black Protocol is triggered as Jesper prepares for the guards. Inej waits when the leader of the Menagerie, Heleen, arrives and condemns her. Nina convinces Brum to take her to the Grisha cells, but he locks her inside revealing that he remembers her. It looks like Matthias betrayed her until he knocks Brum out and rescues her. They find Yul-Bayur’s son, Kuwei, and rescue him. Kaz arrives as the drüskelle attacks them, blows up the ash tree in the center of the court, and throws them all into the wellspring underneath it. They are rushed out to land and barely survive.

Meanwhile, Inej is rescued by Jesper and Wylan. They break through the glass using a tank, then drive it through the wall. They meet Kaz and the others but are startled to see a Fjerda army. Nina takes some jurda parem and knocks the entire army out, including the drüskelle and injures Brum. On the way home, she suffers from post jurda parem symptoms and tires not to beg for more. Inej tells Kaz she is going to hunt slavers and he asks her to stay. When she says she only will without all of his armor - such as his gloves - he does not respond.

Back in Ketterdam, Kaz, Jesper, Matthias, and Kuwei meet with Van Eck. Once they exchange Kuwei for the money, Van Eck says that they will not leave the island and has their boats smashed. This includes to Ferolind even though Van Eck knows that Wylan is on it. However, it is revealed that Wylan actually had himself tailored to look like Kuwei, and the real Kuwei has been hidden along with Nina. Van Eck captures Inej and tells Kaz that he has one week to give him the real Kuwei before leaving. Kaz then asks Jesper why he betrayed them to Rollins, but Jesper says he did not have a choice because of his debts. Eventually, Kaz decides that they are going to take down Van Eck and save Inej themselves. The book ends with him trading his stocks in the Crow Club to Rollins in exchange for money, but not before stealing numerous items of Rollins' without the man noticing.

More summaries and resources for teaching or studying Six of Crows.