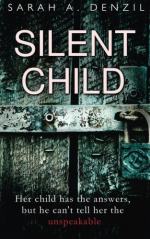 This detailed literature summary also contains Quotes and a Free Quiz on Silent Child by Sarah A Denzil.

In Silent Child by Sarah A. Denzil, Emma Price-Hewitt learned that monsters were in hiding all around her in the people she met every day, even in her own home. When her son, Aiden Price returned home ten years after it was believed he died in a flash flood, Emma went searching for the monster who had taken him and kept him captive. Instead of finding a stranger responsible for hurting Aiden, she found a variety of monsters with whom she interacted every day, some who covered their truce faces so flawlessly she had never guessed she was in danger.

In June of 2006, Emma learned that her six-year-old son had wandered away from the school building during a freak flash flood. No one could find him in the confusion as students were moved to dry rooms when the school’s roof began leaking. Several days later, Aiden’s red coat was discovered in the river. Although no body was found it was assumed that he had drowned.

Ten years later, Emma believed she was finally healing after Aiden’s disappearance and the death of her parents in a car wreck a few years later. Jake Hewitt, a teacher at the school Aiden attended, had found Emma just after she tried to end her life in a fit of desperation and depression. He got her to the hospital and then nursed her back to health and back to life. The two were quickly married and Emma was expecting a baby with Jake. Emma believed she had moved on from Aiden’s disappearance, she had even forgiven and become friends with the teacher who was in charge of Aiden when he went missing. But then three weeks before her baby was due, Emma got a call from the detective on Aiden’s case telling her that Aiden had been found.

Emma’s life was thrown into turmoil trying to adjust to the Aiden who had returned to her. He would not talk and went about his activities like a robot. Emma even feared he was working in cooperation with his kidnapper to keep the police from finding out what happened to him. Emma’s husband clearly did not like that Aiden had returned and warned Emma it was not safe for him to be in their house. Newspaper reporters hounded the family for pictures and interviews. People whom she had thought were friends turned on Emma and sold their stories about Aiden to the press. To make matters even worse, Aiden’s father, Rob, returned from the army. Though Rob had technically abandoned her when he joined the army after Aiden’s disappearance, Emma had to struggle to stay focused on her new family with Rob around.

Because Rob disliked Jake and told Emma that he did not trust him, Emma tried to rule out Jake’s involvement in Aiden’s disappearance by proving the only time they were apart was when Jake taught a night class. When Emma received information about the class, she learned Jake lied about the class. Emma confronted Jake and he claimed he had an addiction to casual sex and had lied in order to cover up his affairs. Rob, meanwhile, had been following Jake and discovered a garage he visited regularly. Emma and Rob investigated the garage and discovered Jake had been stalking Emma since she was a young girl. From the information found there, Rob suspected Jake had been responsible for the car crash that killed Emma’s parents.

Rob took Emma to the home of a friend hoping to keep her safe from Jake. Instead Jake was waiting for them there. After he knocked Rob unconscious, Jake admitted to Emma that he had arranged for her parents to be killed. He did not kidnap Aiden but had pushed him into the river, hoping he would drown. Because Emma betrayed him, Jake planned to kill her but Emma’s anger and motivation to save her son and unborn baby gave her the strength she needed to protect herself.

After Emma killed Jake, Aiden ran from her. She believed he was afraid of her but it turned out he was leading her to the place he had been held prisoner. He talked to her for the first time as he pointed out the door to a World War II bunker. Inside the bunker was the body of Aiden’s kidnapper, Hugh, a friend of the family.