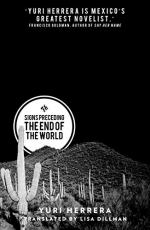 Signs Preceding the End of the World Summary & Study Guide

Herrera, Yuri
This Study Guide consists of approximately 35 pages of chapter summaries, quotes, character analysis, themes, and more - everything you need to sharpen your knowledge of Signs Preceding the End of the World.

Signs Preceding the End of the World Summary & Study Guide includes comprehensive information and analysis to help you understand the book. This study guide contains the following sections:

This detailed literature summary also contains Quotes and a Free Quiz on Signs Preceding the End of the World by Herrera, Yuri.

NOTE: The following version of the book was used to create this study guide: Herrera, Yuri. Signs Preceding the End of the World. Translated by Lisa Dillman. And Other Stories, 2015. First published in Spanish in 2015.

At the beginning of the novel, protagonist Makina barely escapes from a sinkhole in a place called Little Town. She watches an old man fall into the hole, and is grateful to escape. Makina’s mother, Cora, is sending her north to bring her brother a note. Makina’s brother left home after local thugs promised there was land waiting for him across the border. Makina is in Little Town to talk to some people who she hopes will help her cross the border.

While in Little Town, Makina talks to Mr. Double-U, Mr. Aitch, and Mr. Q. They all agree to help her. Mr. Aitch gives her a packet of something covered in gold cloth, which she must deliver after she crosses the border.

In Chapter 2, Makina takes a bus to the Big Chilango—a slang term for Mexico City. From there she catches a bus north to the river. On the bus, two young boys harass her and she nearly breaks one of the boy’s fingers. She crosses the river with the help of Mr. Aitch’s man, Chucho. Although their inner tube flips, they arrive on the shore safe.

In Chapter 3, Makina and Chucho defend themselves from a “patriot” (47) rancher, who accosts them. Police detain Chucho and Makina escapes alone with a superficial bullet wound. She continues walking until, in Chapter 4, Makina encounters a man with a truck who drives her into town. She goes to a baseball stadium with an old man and delivers Mr. Aitch’s packet to Mr. P.

In Chapter 5, Makina begins to ask around for her brother. Outside a restaurant she encounters the same young man from the bus. He is working for a restaurant now and takes her to see an old woman who also works there. The woman gives her a suggestion on where to look for her brother. She recalls that Makina’s brother left the restaurant one day with a sad-looking woman.

In Chapter 6, Makina knocks on the door of the address the woman gave her. A man tells her that the family has moved, but that one son remains as a soldier in town. In Chapter 7, Makina proceeds to the army barracks, where she discovers that the soldier is actually her brother. According to Makina’s brother, the sad-looking woman hired him for a large sum of money in order to replace her son in the army. Makina’s brother adopted the boy’s name and was deployed for war. Now he intends to continue living in the United States under the boy’s name; he never received the full amount of the promised money.

In Chapter 8, Makina returns to town only to be rounded up by the police along with a group of “homegrown” (65) men like her. When the policeman challenges one of the suspects to write a letter confessing his illegal immigration, Makina seizes the pen and writes her own distraught, impassioned letter. The policeman, moved, lets them go.

In Chapter 9, Makina wonders what will happen to her. A variety of persons, including Chucho, escort her to a tall, thin man who hands her a file containing her new identity. Makina believes that she now understands, and feels ready to face her fate.

More summaries and resources for teaching or studying Signs Preceding the End of the World.

Signs Preceding the End of the World from BookRags. (c)2022 BookRags, Inc. All rights reserved.