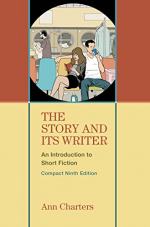 Related Topics
Ada; or, Ardor: A Family Chronicle
A Guide to Berlin
Invitation to a Beheading
Laughter in the Dark
Lolita

Vladimir Nabokov
This Study Guide consists of approximately 18 pages of chapter summaries, quotes, character analysis, themes, and more - everything you need to sharpen your knowledge of Signs and Symbols.

This detailed literature summary also contains Quotes and a Free Quiz on Signs and Symbols by Vladimir Nabokov.

The following version of this story was used to create this study guide: Nabokov, Vladimir. Symbols and Signs. The New Yorker, 1948.

The story begins with a married couple trying to decide which birthday present to buy for their son, who is a patient at a mental hospital. They decided to buy him some jars of candy, and they made their way towards the hospital. However, the remainder of their day was plagued by an unending assault of misfortune. On their journey to the hospital, the parents were delayed by a broken train. After leaving the train and waiting for a bus, they finally arrived at the hospital, only to be greeted by a rude nurse who told them that their son had tried to kill himself. The nurse did not allow the boy’s parents to visit him, so the parents were forced to return home.

On their solemn journey home, the mother tried to hold back tears while the father looked distressed. The mother recalled the fact that her son had tried to kill himself many times before. Once they arrived at their home, the mother decided to go to the market to buy fish, but the father forgot that he did not have the house keys. After waiting for some time, his wife returned.

After spending some time at home together, the father went to bed and the mother stayed awake. Eventually, the father returned to the living room and concluded that they must bring their son back home. After discussing his plan with his wife, the phone rang. The parents were expecting a call from the doctors, but they heard a young girl’s voice instead. The mother told the girl that she called the wrong number.

The parents continued their conversation after they ended the call. However, the phone rang once again, and it was the same girl. After the mother told the girl about her recurring mistake, the parents examined the jars of candy they had bought for their son. The story ends with the parents hearing the phone ring once more.

More summaries and resources for teaching or studying Signs and Symbols.