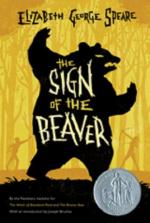 Elizabeth George Speare
This Study Guide consists of approximately 48 pages of chapter summaries, quotes, character analysis, themes, and more - everything you need to sharpen your knowledge of The Sign of the Beaver.

Sloan, Eric. Diary of an Early American Boy. New York: Ballantine, 1984. A historical reconstruction of the daily life of a young man who lived in the same era as Matt Hallowell.

More summaries and resources for teaching or studying The Sign of the Beaver.

The Sign of the Beaver from BookRags. (c)2021 BookRags, Inc. All rights reserved.