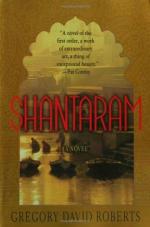 Shantaram by Gregory David Roberts is a lengthly book, but very interesting reading. The opening of the book lets the reader know that he/she will be thinking about many philosophical issues during the book. It begins: "It took me a long time and most of the world to learn what I know about love and fate and the choices we make, but the heart of it came to me in an instant, while I was chained to a wall and being tortured. I realised, somehow, through the screaming in my mind, that even in that shackled bloody helplessness, I was still free: free to hate the men who were torturing me, or to forgive them. It doesn't sound like much, I know. But in the flinch and bite of the chain, when it's all you've got, that freedom is a universe of possibility. And the choice you make, between hating and forgiving, can become the story of your life" (Chapter 1, pg. 3).

Lindsay, an escaped Australian convict, arrives in Bombay, and the adventure begins. One of his first encounters is with a woman named Karla, and it is love at first sight for him. He is accepted by her circle of friends. Lindsay must survive and he does so by arranging for foreigners to obtain drugs. He receives a commission on both ends of the deal. When his visa expires, he moves into the slums and runs a medical clinic for the slum residents.

He attracts the attention of Abdel Khader Khan, the head of the Bombay mafia's council. When he assists Karla in one of her schemes he runs afoul of a powerful Bombay woman who has him imprisoned. When he is released, he goes to work for Khader and the Bombay mafia. He becomes involved in various black market operations for them and ends up in Afghanistan delivering weapons and other items to the mujaheddin fighters. As he rises through the ranks of the Bombay mafia, he makes many lucrative business deals for them and becomes accepted as one of them.

Shantaram is an extraordinary book about a man's search for himself and meaning in life. There are many discussions between the characters about many interesting philosophical issues. Lindsay somehow needs to forgive himself for the things he has done is his part. He is searching for answers, as are many other people in the book. Lindsay is basically a good and caring person, despite his past and his profession. He accepts people for what they are without trying to change them. He respects them for who they are regardless of their status in life. All human beings are equal to him.

Shantaram is a long novel of 933 pages but it is well worth reading. The reader will find the book difficult to put down until he/she finishes reading the book. There is enough suspense to make the reader want to know what happens next. Roberts also provides an inside look at the functioning of the various illegal activities of the Bombay mafia.