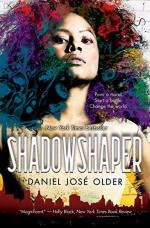 Older, Daniel José
This Study Guide consists of approximately 54 pages of chapter summaries, quotes, character analysis, themes, and more - everything you need to sharpen your knowledge of Shadowshaper.

As the narrative begins, Sierra is working on the mural of a dragon that she is painting on a five-story, unfinished tower. The tower is the only one on a block of brownstones. Manny, a friend of Sierra’s grandfather who is also the editor of a neighborhood newspaper, has asked her to paint the mural. She notices that a nearby mural is fading and thinks she sees a tear in the eye of the mural’s subject. While Sierra is working, Manny receives news about one of his friends, Ol’ Vernon. When Sierra asks what has happened, Manny is not clear as to whether Vernon has died or not. Before leaving, Manny tells Sierra that she must finish the mural quickly.

Sierra goes home. She needs to get ready for a party that is happening that evening. On her way, she goes to see her ailing grandfather who lives on the top story of her family’s brownstone. He has had a stroke and can barely speak, but he says that he is sorry and that she needs to hurry and finish the mural. He also tells her that the shadowshapers are in danger. She does not know what he is sorry about or anything about shadowshapers. When she questions her grandfather, he does not explain. Sierra says that it will take her some time to finish the mural, he tells. Her grandfather says that a boy named Robbie will help her. Sierra leaves him and gets ready for the party. She goes downstairs where her best friend Bennie is waiting for her and asks her mother about the shadowshapers. Her mother says that she does not know what Sierra is talking about. Sierra does not believe her.

Later, at the party, Sierra meets Robbie who agrees to help her with the mural. Then a zombie-like figure crashes the party. Robbie tells Sierra to run, and the creature chases her, asking her the whereabouts of a person name Lucera. Sierra does not know anyone named Lucera. Sierra discovers that the creature who chased her is Ol’ Vernon, who has been reported missing. Then, her grandfather points her to a picture including Ol’ Vernon and another man named Dr. Jonathan Wick. Then, Sierra begins to investigate.

Sierra focuses her investigation on discovering the identity of Wick. At the same time, Robbie tells her about shadowshaping, a magic that allows spirits to connect with the present through paintings, music, and stories. Robbie is a shadowshaper, and Sierra learns that she is one as well. As the attacks on her continue and shadowshapers die, Sierra realizes that Wick is her enemy and that she needs to find Lucera as she has the magic that keeps shadowshaping alive. Wick wants to keep shadowshaping alive as well, but as an outsider he does not realize that the secret of shadowshaping is community. He wants all of the power for himself. In trying to get it, he is killing the very thing that he wants to save.

With the help of her friends, Sierra finds Lucera and realizes that Lucera is her deceased grandmother. Lucera passes her abilities to Sierra. During her meeting with Lucera, however, Wick’s forces kidnap Robbie. When Sierra discovers that Wick has been living in the tower she goes there with the intention of facing him alone. However, her friends are there to help her. They enter the tower and battle with Wick’s forces. Sierra finds Robbie who tells her that Wick wants to kill all of them. She sends Robbie to protect her family. Then, she faces and defeats Wick. Instead of killing him, she instructs the spirits to take away all of his powers.

At the end of the narrative, Sierra reconciles with her mother who had rejected shadowshaping in her youth. Sierra leads a ceremony to honor the dead spirits she and her friends know. Also, Sierra makes members of her family and the friends who helped her find and defeat Wick her shadowshaper friends, thus beginning a new generation of shadowshapers.

More summaries and resources for teaching or studying Shadowshaper.