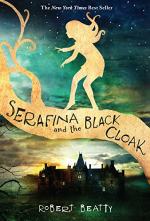 Robert Beatty
This Study Guide consists of approximately 50 pages of chapter summaries, quotes, character analysis, themes, and more - everything you need to sharpen your knowledge of Serafina and the Black Cloak.

Serafina and the Black Cloak Summary & Study Guide includes comprehensive information and analysis to help you understand the book. This study guide contains the following sections:

This detailed literature summary also contains Quotes and a Free Quiz on Serafina and the Black Cloak by Robert Beatty.

NOTE: This study guide refers to Serafina and the Black Cloak by Robert Beatty (Kindle Edition).

In Robert Beatty's Serafina and the Black Cloak, the year is 1899. Serafina, the main character, is a twelve-year-old girl who secretly lives in the basement of the Biltmore Estate with her father, a gifted mechanic who works there. Serafina is a different looking girl. She has only has four toes on each foot, and she is missing bones. The missing bones give her the ability to squeeze into very tight spaces. Serafina also has large amber eyes and loves to catch rats. One evening, she is catching rats in the manor when she sees a mysterious man in a black cloak with a young girl who is wearing a yellow dress. The girl manages to escape the man’s grasp and runs away. He chases the girl, and Serafina follows. Just as Serafina is ready to attack the man, he wraps the cloak around the girl and she vanishes. He then sees Serafina and starts chasing her. Serafina runs and hides. She survives the night.

Serafina's father finds her the next morning, and she tells him what happened. He thinks that she is imagining things. He is also preoccupied with work as the machine that provides electricity to the estate is not working. Angered and frustrated by her father’s response, Serafina defies him and goes upstairs, a place where she is not allowed to go. She wants to tell someone what happened so that she can help the missing girl. There she sees the Vanderbilts and their guests. Serafina notices one man, Mr. Thorne, who entertains the guests while they wait for their horses. Thorne has talents that surprise a man who appears to be a good friend of his.

Even though Serafina tries to stay hidden, Braeden sees her. Braeden is the twelve-year old nephew of George and Edith Vanderbilt. Braeden lives with his aunt and uncle because his parents are dead. Serafina and Braeden introduce themselves to each other. Serafina starts to tell him what happened to the girl in the yellow dress when a woman runs out crying that her daughter, Clara, is missing. Serafina realizes that Clara is the girl in the yellow dress. The boss of Serafina's father sees Serafina, but she manages to escape. She goes to warn her father that they are going to search the house, including the basement, to find the missing girl.

As they cover up evidence that they live there, her father tells Serafina the story of how he found her. She is not his biological daughter. The news upsets her and leaves her confused. They cannot talk about the matter because the men come to search the area. She evades them and goes to look for Braeden. She goes to the stables and gets caught again. Braeden comes just in time to save her. She makes up a story as to who she is and ends up in Braeden’s carriage. His aunt and uncle are sending him away for his safety. On the way, however, the Man in the Black Cloak attacks the carriage. He wants Braeden. However, he ends up taking one of the footmen, a young boy named Nolan. Braeden and Serafina have to stay in the carriage for the night.

A rescue party arrives the next morning, but Serafina hides. After they leave, she starts to go back to the estate. She takes a path that does not directly lead her to the mansion. She hopes that it will lead her to a deserted village. She finds a graveyard and also some cubs. She plays with the cubs and feels as if they are welcoming her home. Suddenly, the mother comes and attacks her. Serafina escapes, but she is lost. Finally, she follows the river, and her father finds her. He warns her to stay out of the matter and stay safe, but Serafina does not listen.

Due to the atmosphere at the Estate, Edith Vanderbilt plans a gathering. Thorne impresses everyone with his talents, and George Vanderbilt invites him to have drinks later with his close friends. As Serafina’s suspicion of Thorne grows, she finds out that Braeden is going to go with Thorne the next morning and stay at his place for his safety. She knows she has to act in order to save Braeden.

That evening, she lures Thorne to the cubs’ den, knowing that the lioness will attack him in order to save her cubs. The plan works, but then the lioness turns to attack her. When they look each other in the face, the attack stops. Then, the Black Cloak starts to speak to Serafina. It wants her to put it on. She does for a short while. The cloak offers her power and fame. When she puts the hood on, she sees all of the people the cloak has absorbed. Instantly, Serafina takes off the cloak. The Black Cloak fights Serafina, and she tries to destroy it. Then Thorne, who is not dead yet, fights her. From out of nowhere Braeden’s dog comes and attacks Thorne. The lioness comes to help. They kill Thorne.

In the meantime, Seraina fights the Black Cloak. She finally manages to destroy it and when she does, all of the absorbed people appear. She recognizes Clara and Nolan. A Russian girl who had also disappeared is there, too. There is a woman who seems to need help. Serafina goes to assist her and when she does, she finds out that this is her mother. She is a catamount and when the Man in the Black Cloak took her, he only took the human part. The lioness was her cat part, and the cubs are Serafina’s half-siblings.

As the story ends, everyone goes back to the estate. However, Leandra, Serafina’s mother, chooses to stay in her cat form. She goes back to take care of her cubs. Serafina tells Braeden about her identity, and the Vanderbilts make plans to make the basement more comfortable for Serafina and her father. They accept her and her father as part of the household.

More summaries and resources for teaching or studying Serafina and the Black Cloak.

Serafina and the Black Cloak from BookRags. (c)2022 BookRags, Inc. All rights reserved.