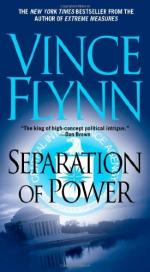 Vince Flynn
This Study Guide consists of approximately 39 pages of chapter summaries, quotes, character analysis, themes, and more - everything you need to sharpen your knowledge of Separation of Power.

This detailed literature summary also contains Topics for Discussion and a Free Quiz on Separation of Power by Vince Flynn.

The Separation of Power is part of a series of espionage novels written by Vince Flynn. It continues the story of the counter terrorist, Mitch Rapp. Mitch is on the verge of retirement, but knows he cannot retire safely until he has found out who tried to kill him on his previous mission to Germany. However, his obsession only creates more problems for him, breaking up his relationship with Anna Rielly, getting him involved with the Israeli secret police and taking him on one last mission to destroy nuclear warheads in Iraq.

The book opens with Hank Clark meeting the billionaire Mark Ellis in the Bahamas. Ellis is angry because Clark has not dealt with the new CIA director Irene Kennedy as he said he would. Ellis says he invested a lot of money in a venture with the CIA and it needs a director who will play ball. Meanwhile, back in Maryland, Anna Rielly and Mitch Rapp enjoy a relaxing morning. They are deeply in love, and Mitch is on the verge of giving up his fieldwork with the CIA to settle down with her. Before he hands in his notice, he has a meeting with Irene Kennedy. Kennedy wants Mitch to stay on as a "desk jockey" and shows him a video tape of a woman leaving a building after killing a man called Peter Cameron, the same man who tried to kill Mitch. Irene says the woman is Donatella Rahn, and Irene wants Mitch to fly over to Milan to ask her who hired her to kill Cameron. At the same time, Mitch proposes to Anna. At the Israeli embassy, Clark meets Mossad director Ben Freidman. He wants Freidman to arrange to have Donatella killed.

The President meets with the Mossad director Ben Freidman. Freidman tells the President Israel has discovered Iraq is working with North Korea to build nuclear weapons. He says in exchange for oil, Saddam Hussein has hired the North Korean physicist Dr. Park Chung Lee to help develop nuclear components under the foundations of a real hospital. Israel needs America's help to take out the bombs. Meanwhile, Hank Clark meets congressman Albert Rudin in a steam room. Rudin wants Irene Kennedy out of the CIA. Clark says he knows someone who can help him find some damning evidence to oust her from her position.

Freidman decides to hire Marc Rosenthal to kill Donatella. Rosenthal asks if it is a solo or team job. Freidman laughs and says it a team job because Donatella is very dangerous. Meanwhile, Mitch and Anna catch a flight to Milan from Washington Airport. Mitch decides not to tell Anna about his business meeting because Donatella is an old flame. At the same time, Marc Rosenthal arrives in Milan with his two buddies Yanta and Jordan Sunberg.

The President meets with General Flood. Flood has an idea for taking out Saddam's weapons. Saddam and his sons drive around in white Mercedes, and to avoid detection, they have many other white Mercedes driving around Baghdad at the same time. Flood thinks they should put a Delta team into a white Mercedes, and then they can drive to the bombs unimpeded. Meanwhile, Mitch meets with Donatella at the Jamaica Cafe in Milan. Mitch asks Donatella who hired her to kill Cameron, but Donatella is more interested in talking about Mitch's new girlfriend. Donatella says she still loves him.

Mitch and Dontella go for a walk in the park. Mitch is trying to convince Donatella to tell him when hired her when he spies someone in a car watching them. He tells Donnatella to wait where she is and runs off. Donatella decides to go against his advice and go up to her apartment. She makes sure, however, to take the stairs with her gun drawn. In her house, she somersaults into the lounge and hides behind the sofa. She springs to her knees to shoot, but a man shoots her in the head and shoulder. The wounds are only superficial, and Donatella jumps up and kills him. Mitch arrives at the apartment and dresses Donatella's wounds. She wants a shot of morphine, but Mitch says he will not give it to her until she tells him who hired her. Dontella tells Mitch it was Ben Freidman.

Mitch takes Donatella back to his hotel room. Anna is not happy with him and asks where the hell he has been. Before Mitch can answer, the drugged-up Donatella tells her Mitch and she are lovers. Hearing this, Anna storms out of the room. Mitch has no choice but to stay with Donatella. He makes a few phone calls to Kennedy and then takes Donatella back to the relative safety of America. Back in the States, Mitch accepts a mission to destroy Saddam's nuclear warheads.

General Flood introduces Mitch to the other 12 men taking part in the mission. They are dark-haired and dark-eyed to fit in with the Iraqi civilians. Mitch says that they should not scout the area because they are likely to get caught. Instead, he suggests he impersonates Uday Hussein, and they drive into Baghdad as though they own the place. Meanwhile Norb Steveken hands Rudin an envelope with top-secret information that could end Irene Kennedy's career.

Inside the envelope, Rudin finds information about the Orion Team and their illegal operations in the Middle East. Rudin is ecstatic because he knows he now has the information to take Kennedy down. With Hank Clark's encouragement, he appears on Meet the Press and reveals the top-secret information. The President is livid and thinks it could spell the end of his and Irene's careers. Irene is far calmer. She tells the President, Rudin has revealed top-secret information and has thus committed a criminal act.

Irene Kennedy appears before a committee to answer some questions, but refuses to answer them. She says she is keeping quiet in the interests of national security. Meanwhile, Mitch and the Delta team make it to the Baghdad hospital. By pretending he is Uday, Mitch persuades Dr. Park Chung Lee to hand over the nuclear components. In Washington, the President talks to the Israeli Prime minister on the phone. The Prime minister thanks the President for helping Israeli. In reply, the President asks if he can send Freidman over to the Whitehouse to see him.

With the victory over Saddam now made public, the President is popular again, and Rudin's star fades dramatically. Scared he is going to lose his job, Rudin goes to Hank Clark for help. Hank shows sympathy, but knowing Rudin is now a liability throws him out of his office window. Back in the Whitehouse, Mitch Rapp holds Ben Freidman to gunpoint. He insists that Fredman tell him, the President and Irene Kennedy who asked him to hire Donatella Rahn. Freidman tells them it was Hank Clark.

More summaries and resources for teaching or studying Separation of Power.