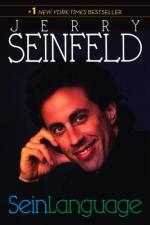 Jerry Seinfeld
This Study Guide consists of approximately 24 pages of chapter summaries, quotes, character analysis, themes, and more - everything you need to sharpen your knowledge of Seinlanguage.

Seinfeld talks about how he does not like "to be continued" episodes on television and how funny it is when a person moves a television in their car and has to leave it for a minute, they would cover it with a sweater hoping to disguise it.

Seinfeld talks about taking dates to restaurants and the irony of the bill coming after the food is gone when the person is no longer hungry.

Seinfeld loves his answering machine and wishes he could be one so he does not have to talk to people he sees on the street.

Seinfeld and his mother have a constant fight in the car over how fast his father is driving and how much gas they have.

Seinfeld loves his apartment, but does not have the nerve to ask neighbors to be quiet in the middle of...

More summaries and resources for teaching or studying Seinlanguage.