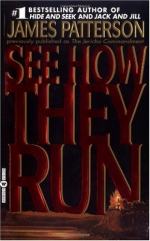 See How They Run Summary & Study Guide includes comprehensive information and analysis to help you understand the book. This study guide contains the following sections:

This detailed literature summary also contains Topics for Discussion and a Free Quiz on See How They Run by James Patterson.

See How They Run by James Patterson is a novel that takes us on a frightening ride from the Holocaust in 1940's Germany to the present day. It follows the attempts of Holocaust survivors to keep the memory of past atrocities alive in an effort to prevent them from becoming a part of the future. Five months before the beginning, three friends meet at the King David Hotel in Jerusalem. They are responding to a summons from Benjamin Rabinowitz that tells them that the time has come and that the fourth Reich is about to begin. All are survivors of the Nazi death camps thirty-five years earlier, and all have sworn to remember the Holocaust in all its terrible details. Benjamin Rabinowitz begins by telling the others that the Nazis are becoming more wealthy and powerful every day. They have legitimate businesses all over the world, running multinational companies including oil and automobile conglomerates. Slowly, Benjamin lays out his plan to put a stop to the Reich once and for all. One hundred and seventy-four days later, on four different continents, a plot called Dachau Zwei or Dachau Two will be set in motion.

Using their combined resources, this survivors group with the express purpose of hunting down and killing Nazi war criminals, will become more and more like the animals they are so desperate to protect the world from. The final solution is more of a Nazi solution than a Jewish one, involving the extermination of hundreds of athletes from the Olympic games. In the end, the group that was formed to protect Jews worldwide has become the very evil they so feared. In a plot that is monstrous, a newly appointed Fuhrer finds his revenge so many years after the original atrocities. The best hope of minimizing the amount of damage done is in the hands of the very families where it all started.

It is also a love story that begins, stops and begins again. A complicated, and involved plot that crosses the continents, it is a read that is never dull. David and Alix join forces to stop a plot so terrifying and so evil that even those involved are not aware of it's entirety until the very end. Alix's involvement will almost be what kills them both, but just when it seems as though all hope is lost, love and honesty triumph! It's a story of families who's pasts link them with emotional bonds that are unbreakable and at the same time, unbearable. It is also a story of truth, and love overcoming evil.

See How They Run from BookRags. (c)2022 BookRags, Inc. All rights reserved.