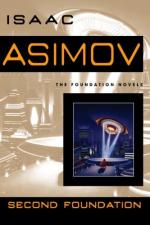 Isaac Asimov
This Study Guide consists of approximately 36 pages of chapter summaries, quotes, character analysis, themes, and more - everything you need to sharpen your knowledge of Second Foundation.

This detailed literature summary also contains Topics for Discussion and a Free Quiz on Second Foundation by Isaac Asimov.

In the first part, the Mule has all but destroyed the Foundation and has begun to build his own Empire. However, he knows that he can never truly claim success until he has found and destroyed the mythical Second Foundation and sends his general, Hans Pritcher, and the untrustworthy Bail Channis out on a quest to find it. With his skills of mind control, the Mule knows Channis is an agent of the Second Foundation, but at the same time, relies on Channis to inadvertently lead the Mule to the right location.

Channis takes Pritcher to the planet Rossem. At this point, Pritcher becomes suspicious of his comrade and arrests him on treason. He tells Channis that in fifteen minutes the Mule will arrive and kill him. However, by the time Mule arrives, Channis has taken over Pritchard's mind. Though his mind control is inferior to the Mule's, he tells him if he does not put down his blaster, he will give Pritchard the order to kill him. If the Mule puts down his blaster then he can have back Pritchard's mind. The Mule relinquishes his weapon and sets about weakening Channis' resolve. Fortunately, Channis only has to wait a few moments before the Second Foundation's First Speaker enters the room. The First Speaker tells the Mule that Channis has taken him to the wrong planet. Channis thinks Rossem is the Second Foundation, but only because the Second Foundation has conditioned his mind. Channis agreed to the conditioning so as to lead the Mule into a trap without being at risk of giving away their true location. At this point, the Mule drops his guard, and the First Speaker enters his mind. He conditions the Mule to believe the Second Foundation does not exist.

In the second part, the 14-year old Arcadia Darell is writing a report for school when a man appears at her window. The man's name is Pelleas Anthor and says he has come to see her father Dr. Darell. At this point Dr. Darell enters his daughter's room. He has been expecting Anthor and takes him downstairs to talk.

The next day Munn leaves for Kalgan. However, midway through the journey he finds Arcadia hiding in his baggage compartment. Realizing to turn back would look suspicious, he decides he has no choice but to take Arcadia with him.

When they arrive in Kalgan, Munn manages to set up a meeting with the Kalgan leader Lord Stettin. Stettin permits Munn access to the Mule's records but soon becomes suspicious of his real motives. On their second meeting, Stettin tells Munn he knows the real reason he has come to Kalgan and has decided to hold him and Arcadia prisoner, while he conducts a war against the Foundation. In the next room Stettin's mistress, Callia, helps Arcadia to escape.

Arcadia flees to the Kalgan Spaceport. She knows she cannot go back to the Foundation so she buys a ticket to Trantor. Just before she is about to leave, the Kalgan police enter the terminal to arrest her. Now in a desperate situation, she runs into the trader Palver Preemer and his wife. Preemer bribes the police and takes Arcadia back to his home in Trantor.

In Trantor, Arcadia has information she must get to her father, but with a war now raging, it is impossible for her to leave. She decides her best bet is to persuade Palver that war is potentially very profitable for a trader, and he could sell his goods to the Foundation. Palver agrees this is a great idea and sets off with a mind to make his fortune and a promise he will deliver Arcadia's father her message.

More summaries and resources for teaching or studying Second Foundation.