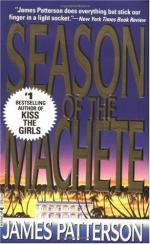 Season of the Machete Topics for Discussion

Who is Carrie Rose? How does Carrie Rose plan her own escape from those who would track her down following the murders? Is she successful?

Who is Damian Rose? How does he plan his escape from San Dominica following the murders? What was his mistake?

Who is Dassie Monkey Dread? What role does he play in the murders?

Describe how Peter Macdonald becomes a witness. What is eventually revealed regarding the incident?

What was the purpose of the murder of Carol Hill?

The Rose's presented two plans regarding the murders at San Dominica. What were they called? What were the reactions to the two plans?

Who initiates the series of murders? What was the purpose of the murders? Is that part of the plan successful? What is the eventual outcome?

Describe how the use of lookalikes complicates the police investigation.

Describe some of the...

Season of the Machete from BookRags. (c)2023 BookRags, Inc. All rights reserved.