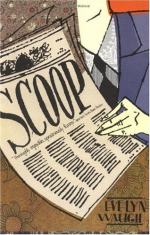 Evelyn Waugh
This Study Guide consists of approximately 60 pages of chapter summaries, quotes, character analysis, themes, and more - everything you need to sharpen your knowledge of Scoop.

This detailed literature summary also contains Bibliography and a Free Quiz on Scoop by Evelyn Waugh.

Evelyn Waugh's Scoop (London, 1938) is a satire on journalism. It is based on Waugh's stint as a war correspondent for the London Daily Mail in Abyssinia (now Ethiopia) in 1935, during which he covered the war between Abyssinia and Italy. Waugh admitted that he had no aptitude for war reporting, but he did observe closely the activities of his fellow journalists. The result was a satirical, farcical novel that takes lighthearted but deadly aim at the newspaper industry and the journalistic profession.

The plot rests on some comic twists of fortune. Lord Copper, the arrogant and ignorant owner of the Daily Beast, sends out by mistake a naïve writer of nature columns, William Boot, to cover the war in the fictional East African country of Ishmaelia. Geographically, at least, Ishmaelia is identical with Abyssinia. William gets some quick lessons in the devious way of journalists, who are always trying to outwit their colleagues and deliver a scoop. Helped by a series of lucky events, William gets several major scoops himself and returns to London as a world-renowned reporter. But it all means nothing to him, and he is happy to return to his country home, the isolated and dilapidated Boot Magna Hall, where his many eccentric relatives live.

More summaries and resources for teaching or studying Scoop.

Scoop from Gale. ©2005-2006 Thomson Gale, a part of the Thomson Corporation. All rights reserved.