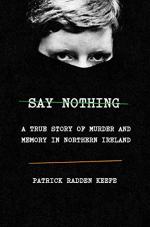 Say Nothing: A True Story of Murder and Memory in Northern Ireland Quotes

Patrick Radden Keefe
This Study Guide consists of approximately 50 pages of chapter summaries, quotes, character analysis, themes, and more - everything you need to sharpen your knowledge of Say Nothing.

In a momentary lull in the shooting, a front door would tentatively crack open and a Belfast housewife in horn-rimmed glasses would stick her head out to make sure the coast was clear. Then she would emerge, erect in her raincoat, a kerchief over her curlers, and walk primly through the war zone to the shops.
-- Patrick Radden Keefe (Chapter 3: "Evacuation")

Importance: This quote from early on in the book exemplifies the unique nature of Northern Ireland's troubles: the war zone, instead of being distant and involving only soldiers, was right at home and was fought by ordinary people who had once been neighbors. The image of the woman in her kerchief waiting for the cessation of bullet-fire is a powerful one precisely because it illustrates the way in which a war 'at home' can emotionally destroy a population even as that population struggles to maintain the semblance of normalcy in everyday life.

More summaries and resources for teaching or studying Say Nothing: A True Story of Murder and Memory in Northern Ireland.

Say Nothing: A True Story of Murder and Memory in Northern Ireland from BookRags. (c)2022 BookRags, Inc. All rights reserved.