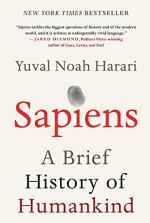 The following version of this book was used to create this study guide: Harari. Yuval Noah. Sapiens: A Brief History of Humankind. HarperCollins, 2015.

Sapiens: A Brief History of Humankind by Yuval Noah Harari describes the development of the human species, who refers to as Sapiens. It begins in the earliest stages of evolution and ends at the present day with some broad predictions for humanity’s future. Harari states that our history is divided by four major revolutions. The first of these Cognitive Revolution, at which point the species developed cognitive abilities that far exceeded those of other humans. The Agricultural Revolution, which occurred 10,000 years ago, was the point at which humans domesticated plants and animals for cultivation. 500 years ago, the Scientific Revolution ushered in modern science, the age of exploration, and capitalism, thus creating many of the foundations on which today’s society relies. Finally, the Industrial Revolution, which started 200 years ago, transformed humanity into the species we recognize today. A major theme throughout this book is that human lifestyles have not consistently improved throughout history. We generally believe that each advancement in technology led to better lives, but the author states definitively that hunter-gatherers enjoyed many advantages over their agricultural descendants. Though industrial humans have access to modern medicine and other important advances, our lifestyle remains far from perfect.

Harari’s goal in writing this book is to determine why Sapiens are the sole surviving human species and why they, as unremarkable apes, came to dominate the planet. Sapiens’ advantage, he argues, rests in our unique ability to communicate ideas that do not actually exist. Though many species have well-developed linguistic abilities, Sapiens appear to be the only species that creates and communicates total fictions. This ability is extremely important because it allows to create shared myths, facilitating cooperation between massive groups of strangers. Throughout history, Sapiens developed money, empires, and religions, all of which are examples of shared myths. These institutions ordered human behavior, allowing us to develop the complex and advanced societies that we have today. Harari concludes that our species’s advancements have but on the brink of another major transition, as we transcend the boundaries of biology and natural selection and are able to engage in intelligent design.