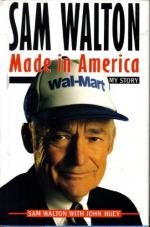 Sam Walton, Made in America: My Story Summary & Study Guide

Sam Walton
This Study Guide consists of approximately 30 pages of chapter summaries, quotes, character analysis, themes, and more - everything you need to sharpen your knowledge of Sam Walton, Made in America.

Sam Walton, Made in America: My Story Summary & Study Guide includes comprehensive information and analysis to help you understand the book. This study guide contains the following sections:

This detailed literature summary also contains Topics for Discussion and a Free Quiz on Sam Walton, Made in America: My Story by Sam Walton.

The autobiography of Sam Walton is an overview of the creation of Wal-Mart as much as it is an analysis of the man who started the discount store, Sam Walton. The novel is less of an autobiography than a bible for the small business owner. Sam offers plenty of advice and detail about how he managed to work against the odds and challenges of growing up in the Great Depression to becoming the richest man in America.

Sam begins his story describing the jobs and work he accomplished as a child and young adult. He was born in Oklahoma just before the start of the Great Depression in 1918. He learned early on that children were not meant to be "takers" in a family; their job was to contribute as much as possible. Even though he was actively involved in sports, went to school, and was in Boy Scouts, Sam still had a paper route, sold magazine subscriptions and trapped animals to help his family financially. In high school, he continued working and was involved in four different sports leagues, as well as his jobs and role as the student body president. His college career matched the rest of his overactive style. Sam impressed people, and was voted the rush captain of his fraternity and became the student body president of the University of Missouri.

Once Sam graduated from the University of Missouri with a business degree, he sought to become an insurance salesman because he knew he could sell. Instead, after he spoke with his neighbor, Hugh Mattingly, he went into retail. After a stint in the Army during wartime, he decided to marry Helen Robson, whom he had met during a trip to Oklahoma. From there, they chose to set up shop in Newport, Arkansas, where Sam founded and ran his first successful variety store. After a legal mistake in his contract forced him to leave town, Sam and Helen settled in Bentonville, Arkansas. Soon after Sam opened one variety store there, he continued opening more stores in the local surrounding areas so not to be burned like he was before in Newport.

Sam's success took off and he started thinking about opening a discount store. His idea was to keep prices as low as possible on key items like health and beauty items to really push these objects to the customers and give them a great deal. Although the profit margins per item were not as good as traditional retail, the increase in overall sales helped to make the concept a popular idea. Sam opened Wal-Mart in 1962 when other discount stores like Kmart, Woolco, and Target also opened.

The success of Wal-Mart pushes Sam into another level of success as he watches his wealth and his store locations increase exponentially over the years. Wisely, in an attempt to keep the business in the family, early on Sam made Helen and their four children all partners in the business. With equal shares, they now own just under 40 percent of the business, a considerable amount for a large corporation like Wal-Mart.

By keeping his personal business ethics, principles, and philosophies in place throughout the growth of Wal-Mart, Sam Walton has made the organization what it is today.

More summaries and resources for teaching or studying Sam Walton, Made in America: My Story.

Sam Walton, Made in America: My Story from BookRags. (c)2022 BookRags, Inc. All rights reserved.