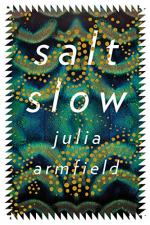 Related Topics
Our Wives Under the Sea

Julia Armfield
This Study Guide consists of approximately 49 pages of chapter summaries, quotes, character analysis, themes, and more - everything you need to sharpen your knowledge of Salt Slow.

The following version of this book was used to create this study guide: Armfield, Julia. Salt Slow. New York: Flatiron, 2019.

Salt Slow is a collection of nine short stories. In the first, “Mantis,” a teenage girl finds herself slowly transforming into a praying mantis—a metamorphosis that her grandmother and mother experienced before her. As she grows increasingly more insectile, she is invited to a boy/girl party by her friends. One boy expresses his romantic interest in her and encourages her to follow him into a bathroom. She does, and proceeds to eat him.

In “The Great Awake,” a woman named Janey describes how she woke one morning to find a ghostly specter before her—it was the physical manifestation of her ability to sleep, and it had stepped out of her body, rendering her an insomniac. This soon became a city-wide phenomenon. Janey found herself drawn to a neighbor, a woman named Leonie who was one of the few people still able to sleep, much to her chagrin. Despite Janey's insistence that this was not something she should actually aspire to, Leonie left one morning with Janey's sleep manifestation, leaving Janey able once more to slumber, but having lost the woman she cared for.

In “The Collectibles,” three female graduate students live together and commiserate about their recent breakups with men. One of the women, Jenny, decides to create the “Perfect Man” (56) by harvesting and fusing the parts of many men (living and dead) together. At the end of the story, she prepares to pluck out the beautiful green eyes of a pizza deliveryman.

In “Formerly Feral,” a teenage girl's parents get divorced and her father remarries a woman that keeps a wolf as a pet. The wolf and the girl develop a strong bond, encouraged by her father and stepmother, and she increasingly develops behavioral and temperamental tendencies that mimic those of the wolf. These include incidents of violence against boys that tease her at school. The story ends with the wolf biting a boy that follows the narrator home from school, resulting in his hand being amputated.

In “Stop Your Women's Ears with Wax,” a woman named Mona is working as a videographer on tour with an all-female rock band, during which she observes many strange occurrences. Men that have belittled the band end up hurt or dead, and after each concert there are reports of female fans injuring men. In the final scene, women riot in the streets after a concert, smashing the window of a fish and chips shop and forcibly removing the male clerk.

In “Granite,” the protagonist Maggie has just entered into her first serious relationship with a man after years of staying single because of her need for independence and overly critical nature. Her boyfriend is employed, kind, and doting, but Maggie still begins to find fault with him. One day he twists his ankle at work, and from that point on he grows weaker and weaker, his body taking on a mysterious gray hue. At the end of the story, Maggie wakes to find her boyfriend has turned to stone in the bed next to her.

In “Smack,” a woman named Nicola sets up camp at the beach house where she used to vacation with her husband, Daniel. Nicola and Daniel are in the middle of a contentious divorce, and she takes issue with the fact that he has claimed this house during the divvying up of their assets. Nicola has relied upon men to take care of her all her life, and as a result she has no practical skills. She does not even know how to turn on the electricity in the beach house. As she sits on the deck morning after morning, she sees hundreds of dead jellyfish washing up on the beach. She contemplates her former marriage, realizing that Daniel was not a very good husband. The final night before she knows she must leave the beach house, Nicola sits on the sand all night beside a pile of ashes from the burning of the jellyfish corpses.

In “Cassandra After,” an unnamed female narrator is visited by the ghost of her girlfriend, Cassandra, who died six months earlier. The two women talk, and the narrator tries to determine why she is being haunted. She recalls memories of their relationship, focusing in particular on her inability to really commit to Cassandra because of her religious faith and the fact that she was uncomfortable dating another woman. She remembers attending Catholic mass and promising God she would stop loving Cassandra. At the end of the story, Nicola apologizes to Cassandra for not pushing herself out of her comfort zone to love her the way she could have.

“Salt Slow” takes place in a post-apocalyptic world that has been flooded by torrential rains. A man and a woman are floating in a boat, and the woman is pregnant. She thinks back over the events of their relationship before the apocalypse, and realizes how much the world has changed, and how much her partner has as well. Even she has changed, as she is now growing webbing between her fingers and toes. When she gives birth, the baby is a half-human, half-sea creature hybrid. The man bludgeons it with an oar and throws it in the water. Days later it emerges, and it has grown monstrously large. The story ends with the woman reaching out to touch her baby as the man yells at her to stop.

More summaries and resources for teaching or studying Salt Slow .