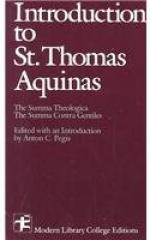 Thomas Aquinas
This Study Guide consists of approximately 31 pages of chapter summaries, quotes, character analysis, themes, and more - everything you need to sharpen your knowledge of Introduction to Saint Thomas Aquinas, Ed., with an Introd. by Anton C. Pegis.

Italy figures in the book as extremely important but is almost never mentioned. It is the home nation of Saint Thomas Aquinas. It is mentioned almost exclusively in the Introduction of the book. Most of the other times it comes up, it does so as part of the Roman Empire, but by the time of this Saint's ordinary life, it was after the fall of the Roman Empire but during the strength of the Roman Catholic Church, which in some ways is a surviving aspect of the Roman Empire, which switched from opposing the Church to protecting it a millennium earlier.

Like Italy, this is background: environmentally relevant to events, but otherwise it goes without saying. Like Italy, it is indicative of Southern Continental Europe and is simultaneously the Northern Coast of the Mediterranean Sea. It was the home of Plato, and often the home of...