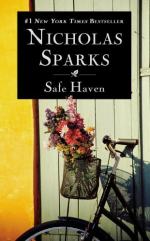 Nicholas Sparks (author)
This Study Guide consists of approximately 36 pages of chapter summaries, quotes, character analysis, themes, and more - everything you need to sharpen your knowledge of Safe Haven.

Safe Haven is a novel by best-selling author Nicholas Sparks. The story follows the main character, Katie, as she moves to Southport, North Carolina and establishes a new life. Katie works as a waitress at Ivan's, which is a local seafood restaurant in town. Even though Katie is new to the town, she seems to keep to herself, as if she is trying to hide something.

Katie rents a cottage in the woods off a gravel road. There is one other cottage there. Soon, Katie finds that she has a new neighbor, a woman in her mid-thirties whose name is Jo. As Jo and Katie get to know each other, Katie finds herself relishing the friendship she builds with Jo. Jo even suggests that Katie get to know the owner of the country store in town, who is Alex Wheatley.

Alex Wheatley is a single father of two kids and a widower. He's also a former investigator for the Army. As he gets to know Katie, he quickly realizes that she is a battered wife hiding from an abusive husband. By the time he confronts Katie about it, the two are already deeply in love with each other. In the meantime, Katie's real husband Kevin, who is a detective for the Boston Police Department, is searching for her. Kevin uncovers the identity his wife, Erin, is using, which is Katie's new identity. Once Kevin hits the town of Southport, things start to unravel quickly.

More summaries and resources for teaching or studying Safe Haven.