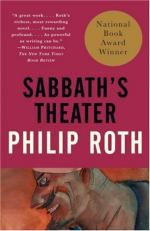 Philip Roth
This Study Guide consists of approximately 66 pages of chapter summaries, quotes, character analysis, themes, and more - everything you need to sharpen your knowledge of Sabbath's Theater.

Sabbath's Theater tells the story of aging puppet master Mickey Sabbath, who embarks in search of a suitable ending for his ignominious life's story. Sabbath, at age sixty-four, finds himself dispossessed of his job, his home and his wife through a series of poor choices driven by his aggressive libido and thirst for revenge. Sabbath sees life from the perspective of an author writing a black comedy. He takes nothing seriously. He chooses each action and word for its shock value, which Sabbath finds immensely entertaining. He sees life as a big show and himself as the puppet master pulling the strings. The purpose of his act is to shock and entertain, but he considers the misery of others entertaining. His purpose is to put on a show and he doesn't consider the pain he causes.

The turning point that propels Sabbath to write the conclusion of his own life comes when his beloved mistress of thirteen years, Drenka Balich, dies from cancer at age fifty-two. Drenka was the one woman of whom Sabbath never tired. Sabbath had shaped her character over the years through his patient tutoring, until Drenka became the wanton, loving whore of his dreams. She was the same age as his wife Roseanna, but despite the fact that Roseanna maintained her figure more carefully than Drenka, Sabbath sees Roseanna as too old for him. With the exception of Drenka, Sabbath likes his women young and he loses his teaching job at the local college due to his indiscretions with the female students. The resulting scandal rocks the local community and sends his alcoholic wife into a rehabilitation facility to dry out, but Sabbath, a man who has devoted his entire life to the pursuit of lust, is unrepentant about his actions.

Sabbath only realizes how much Drenka meant to him when she dies. He had refused her dying wish that he be faithful to her while she was alive and had encouraged her for years to seek out other lovers and report the carnal details to him. Her death finally stirs emotion in him and prompts a crisis in his life. Sabbath leaves his long-suffering wife and returns to New York City for the first time in thirty years to confront the demons of his past, most notably the ghost of his first wife, Nikki.

Nikki's fate remains a mystery to Sabbath. She simply vanished thirty years ago with no explanation or clue as to her whereabouts. Sabbath had nearly gone insane searching the streets of New York for her before he gave up and fled to his quiet mountain town with Roseanna. Now, the suicide and funeral of Linc Gelman, the man who had once produced Sabbath's Indecent Theater in New York, calls Sabbath back to revisit his past. Leaving Roseanna behind, Sabbath goes to stay with Norman Cowan, Linc's former partner and an old friend of Sabbath's.

In New York, Sabbath finds no trace of Nikki and Norman sees no trace of the man he once knew in Sabbath. Sabbath is undergoing some sort of breakdown, but he has toyed with life for so long that he's not sure if the breakdown is real or just another act. He gets himself kicked out of Norman's house after stealing his daughter's panties, coming on to Norman's wife, Michelle and stealing ten thousand dollars in cash that he finds hidden in the master bedroom.

Lost and friendless, apart from his mother's ghost who haunts him mercilessly, Sabbath decides to commit suicide, but he must see his brother Morty's grave first. Sabbath returns to New Jersey for the first time in countless years and uses the Cowan's stolen money to purchase a gravesite for himself in the Jewish cemetery that houses his deceased family members. He thinks about the death of his brother. Morty had been shot down in World War II and Sabbath's life had changed that day. His mother, once a happy, loving woman, became a hollow shell. Sabbath had fled after high school to escape the tragedy and had formed his character as a whore mongering, sex-obsessed man while at sea.

Sabbath drives back to the family homestead on the Jersey shore to stall the end of his life. He finds his old cousin Fish alive and living in the same house on the street where Sabbath grew up. Sabbath also finds his mother's old sideboard in Fish's home. When the old man steps out of the room, Sabbath ransacks the sideboard and discovers a box containing his brother's final effects. He steals the box and runs away to the sea shore to commune with his brother's possessions. Mickey wraps himself in the flag that had graced Morty's coffin and lovingly reviews every item in the box. Sabbath realizes that Morty's things give his life meaning. He feels a responsibility to keep them safe and decides against suicide after all.

With Morty's personal effects in the car, Sabbath reluctantly returns to Roseanna and the only home he knows. When he arrives home, he sees that he has been displaced in his own bed by Christa, a young blonde woman whom Sabbath and his mistress had once manipulated into their bed. Now she seems to have found love with Roseanna and Sabbath is out in the cold. He flees to his last refuge, Drenka's grave, where he pisses on her grave in loving memory of the kind of woman she had been. He is caught in the act by police officer Matthew Balich, Drenka's son. Gleefully, Sabbath thinks his life will end in suicide by cop, but Sabbath lacks the guts to resist arrest to carry out that plan. Instead, he ends the story along in the woods after Matthew releases him and drives away.