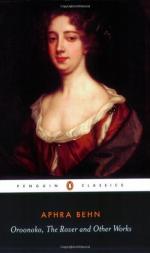 Books Like The Rover by Aphra Behn | Suggested Reading

Aphra Behn's play The Second Part of The Rover (1681), although it lacks the wit and vivacity of the first play, is interesting reading for its portrayal of the fate of the marriage between Willmore and Hellena. Hellena has died at sea, and Willmore once again is a rover.

Aphra Behn's novella Oroonoko; or, The Royal Slave (1688) describes the fate of a captured African prince. Behn based her story on a journal she kept while visiting Surinam when she was a young girl.

William Hogarth's 1735 engravings, The Rake's Progress, is a series of depictions about the consequences of immoral behavior, with each engraving portraying a different version of dissolute life. The series taken as a whole presents a cautionary moral tale.

Daniel Defoe's Moll Flanders (1722) portrays a young woman who is seduced and betrayed but learns to use the power of...