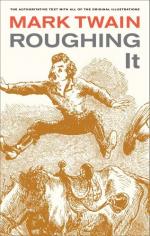 Roughing It Summary & Study Guide includes comprehensive information and analysis to help you understand the book. This study guide contains the following sections:

This detailed literature summary also contains Topics for Discussion and a Free Quiz on Roughing It by Mark Twain.

"Roughing It" is Mark Twain's second novel. It is a humorous collection of facts and somewhat informal travel journal, in which the narrator goes from St. Louis to San Francisco and on to the Sandwich Islands (Hawaii) in the early 1860's. The explosion of the mining business in the Western States of the Union, and more specifically the Territory of Nevada, serve as a backdrop for many of the narrator's adventures. The author examines the economic boom of the area and its consequences on the people, the evolution of English as a diversified language and the transformation of nature by man. The mainly humorous tone of the novel is grounded in the many mishaps, errors of judgments and various mistakes that are constantly preventing the author from attaining his goal - becoming rich with little effort on his part. The book digs in a rich mine of wonderful vocabulary and provides moving descriptive passages. These attributes insure that the novel is just as interesting today as it must have been at the time of its publication, over 130 years ago.

The novel starts as the narrator decides to accompany his brother to Nevada, where the latter will work as Secretary for the Governor of the Territory. Under the pretense of serving as his personal secretary, the narrator intends to use the opportunity to profit from the thriving silver and gold mining business of the West and to quickly make a fortune. The two men travel from St. Louis to St. Joseph by boat, then ride a stagecoach down to Carson, Nevada. During this initial trip, the narrator gets acquainted with the landscape of the western deserts and the men that populate them. He describes the employees of Overland, the mail company that operates the coaches, as well as the Indians and the Mormons of Utah.

Once in Carson, the narrator catches the "Silver fever" and starts looking for opportunities in the mining business. He teams up with several friends, buys mining equipment and moves to Humboldt County. The mining enterprise proves unsuccessful, and the team decides to invest in various claims, a business which proves just as disastrous. The narrator forms another mining party and moves to Esmeralda to work as a trader. Following a series of near-catastrophic adventures, the narrator finds work as a reporter in nearby Virginia. After a few years, the narrator quits his job at the paper and moves to San Francisco.

After losing his job and all his investments, the narrator spends a few months doing "pocket mining" in Tuolumne. After the failure of this last project, he accepts a job and moves to the Sandwich Island, where he spends six months. Upon his return to the continent, he starts a new business as a public speaker, which finally proves successful.

Roughing It from BookRags. (c)2022 BookRags, Inc. All rights reserved.