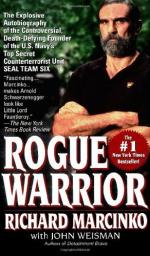 Richard Marcinko
This Study Guide consists of approximately 34 pages of chapter summaries, quotes, character analysis, themes, and more - everything you need to sharpen your knowledge of Rogue Warrior.

This detailed literature summary also contains Topics for Discussion and a Free Quiz on Rogue Warrior by Richard Marcinko.

Richard Marcinko begins his Seal Team Six exercise on Vieques, Puerto Rico. This is a very lifelike exercise and only at some point during the exercise do the men realize that it is just a drill. Richard writes about his working-class coal-miner background. Later his family moves to New Brunswick, NJ where Richard learns to make money at restaurants and, later, to pick up women. In 1958 he enlists in the Navy and soon finds that his real ambition is to be a Navy frogman. After several years he makes it to UDT school and passes through an extremely tough training class. Richard marries Kathy Black and settles down with her in the Virginia Beach area, while he travels all over the world in the Navy. Under the influence of his officer Everett Barrett, Richard decides to go to officer candidate school. The former geeky wild-man becomes an Ensign and leads his first SEAL unit to Vietnam. His 14-man unit, Bravo Squad, is sent to the Mekong Delta to fight around the Binh Thuy area. After dissension with his commander Hank Mustin, Richard is transferred to another commander where he is allowed to fight using his own methods. In a final fight on Ilo-Ilo island, Richard's unit disrupts a Viet Cong staging area. Richard is promoted and soon returns to Vietnam with SEAL Team Two, a platoon. He is involved in intense fighting in the Chau Doc area near the Cambodian border in the overwhelming attack of the VC Tet offensive. Richard's unit fights back to clear the VC out of Chau Doc, but suffers its first fatality.

Richard returns to the United States and for four years settles down with his wife and two children. He and Kathy learn to have Navy parties and acquire social graces, as Richard earns his college education and then studies at the Navy school in Monterrey, California. He studies Vietnamese and French, and finally goes to Cambodia without his family, as the U.S. Naval Attache at the U.S. Embassy. There he actually uses his frogman skills to organize the Cambodian Navy to defend the supply route to the capital, Phnom Penh. He enjoys being with the Cambodian Naval officers, eating cobra eggs, though ignoring the basic facts of the hopeless military situation.

Back in the United States, Richard becomes the commander of a 150-man SEAL unit, SEAL Team Two. He has problems due to his unconventional methods from officers like Scott Sullivan, though he is backed up by superiors, especially Dick Coogan. After 3 years Richard relinquishes the command and works as an intelligence officer in the Pentagon. There he sees bureaucratic methods destroy any hope of success when a mission is launched to rescue the U.S. Embassy hostages in August 1979. In order to improve counter-terrorism operations, Richard proposes that Admiral Hayward make Richard the leader of the new unit, SEAL Team Six. SEAL Team Six undergoes very tough training in which 2 men die. Its only real action under Richard is to send men to test the security of the U.S. Embassy and Marine units in Beirut, Lebanon. Richard's warnings are ignored and suicide bombers destroy these U.S. targets. After this command is relinquished, Richard is denied admission to the U.S. War College. He seeks a new unit and designs the so-called Red Cell, which is to test security at U.S. bases and other targets. The Red Cell spreads mayhem and chaos from New London, Connecticut to the U.S. Admiral residence in Naples Italy, and shows the lack of proper security. Richard makes a lot of enemies and when Ace Lyons his superior is promoted, Richard loses his political protection. Soon a highly funded Navy investigation targets Richard and with little ability to run a defense, Richard is run out of the Navy and eventually thrown into prison.

More summaries and resources for teaching or studying Rogue Warrior.