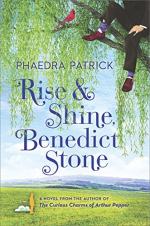 This detailed literature summary also contains Quotes and a Free Quiz on Rise and Shine, Benedict Stone by Phaedra Patrick.

The following version of this book was used to create this study guide: Patrick, Phaedra. Rise and Shine, Benedict Stone. Park Row Books. 2017.

Rise and Shine Benedict Stone is a 2017 contemporary novel of romance and family by Phaedra Patrick. It revolves around the efforts of Benedict Stone to heal and repair his shattered family. When the novel begins, Benedict, who is an ordinary, overweight, forty-something guy, works at his family’s jewelry shop in Noon Sun, England. He is despondent over his wife, Estelle, leaving him due to a disagreement over wanting to adopt a child. Benedict wants children, but Estelle, who cannot have any, does not even wish to adopt. Additionally, the more outgoing and artistic Estelle is bored with Benedict.

Benedict is awakened in the middle of the night by a knock on his door. In walks his niece, sixteen year-old Gemma Stone, daughter of Benedict’s estranged brother, Charlie. Charlie now lives in America. Gemma refuses to say much about her decision to come stay with Benedict, but Benedict agrees to let her remain. He Gemma has such limited family, she is determined to help Benedict win Estelle back. She encourages him to eat healthier, get a little exercise, and enliven the kinds of jewelry he crafts and makes. Together, they learn about gems and rocks from the journal that Benedict’s father once kept. Benedict, in turn, helps Gemma to be more grounded and responsible. Gemma confesses she feels as if her divorced father, remarried and with a baby on the way, does not need her anymore. With Benedict, Gemma feels needed and wanted. Benedict assures Gemma that Charlie does need and want her.

As Benedict’s attempts to win back Estelle unfold, the past does, too. It turns out that Benedict slept with Charlie’s ex-wife, then his girlfriend, before leaving for America. Charlie learned this from the girlfriend. He refused to speak to Benedict for the next eighteen years. Also, Benedict had been somewhat of a parent for an ungrateful Charlie after both their parents were killed by a tsunami on a rock and gem-finding expedition in Sri Lanka.

In the present, Benedict obtains Charlie’s phone number from Gemma’s phone and calls Charlie. Within hours, Charlie is in England. He had not known Gemma’s whereabouts. He and Benedict get into a fistfight, letting loose years of anger. After overseeing the fight, Gemma wanders off alone into the moors above the town. When she does not come home, Benedict and Charlie, along with Estelle, put their differences behind them and set out to find her.

With Gemma back safely, though with a fractured ankle, Benedict and Charlie continue to make peace. They determine that they must do all they can to continue to keep their family intact. They must not let the sadness of the past overcome as they have the potential for a wonderful future together. Benedict and Estelle also come to terms with their relationship. Estelle decides she wants Benedict back. Benedict consents to letting go of the dream of having children. He resumes his life with Estelle.