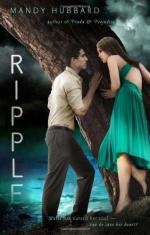 Mandy Hubbard
This Study Guide consists of approximately 19 pages of chapter summaries, quotes, character analysis, themes, and more - everything you need to sharpen your knowledge of Ripple.

Friendship is a dominant theme in the novel "Ripple" by Mandy Hubbard. Friendship exists throughout the course of the novel, both in presence and absentia by lack of friendship. It affects much of the plot, primarily between Lexi and the other students.

In absence, friendship has a negative effect on Lexi. Without friends, which she longs for, Lexi feels alone and isolated. Though this is partly by her own choice, Lexi still can't help but feeling inferior. Her former friends are relentless in torturing her by bullying her and taunting her. They do everything from insulting her to tripping her and laughing at her. Furthermore, this lack of friendship means Lexi really has no one to turn to, apart from her grandmother. It can be plainly seen in the way that Lexi carries herself, hiding in the corner of the courtyard and choosing to remain at home.

More summaries and resources for teaching or studying Ripple.