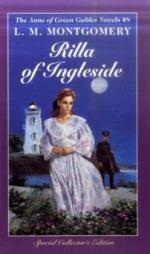 Plot Summary
+Chapters Summary and Analysis
Glen Notes and Dew of Morning
Moonlit Mirth and The Piper Pipes
The Sound of a Going and Susan, Rilla. . .
A War-Baby and Rilla Decides
Doc Has a Misadventure and The Troubles of Rilla
Dark and Bright and In the Days of Langemarck
A Slice of Humble Pie and The Valley of Decision
Until the Day Break and Realism and Romance
The Weeks Wear By and A War-Wedding
They Shall Not Pass and Norman Douglas Speaks
Love Affairs are Horrible and Little Dog Monday Knows
And So, Goodnight and Mary Is Just In Time
Shirley Goes and Susan Has a Proposal of Marriage
Waiting and Black Sunday
Wounded and Missing and The Turning of the Tide
Mrs. Matilda Pittman and Word from Jem
Victory! and Mr. Hyde Goes to His Own Place
Rilla-my-Rilla
Characters
Objects/Places
Themes
Style
Quotes
Topics for Discussion
Order our Rilla of Ingleside Study Guide

Lucy Maud Montgomery
This Study Guide consists of approximately 24 pages of chapter summaries, quotes, character analysis, themes, and more - everything you need to sharpen your knowledge of Rilla of Ingleside.

"Rilla of Ingleside" is a novel in the Anne of Green Gables series, describing the coming-of-age of Anne's youngest daughter, Marilla or Rilla. Set during the First World War in Canada, the narrative traces Rilla's development from a self-obsessed fifteen-year-old girl to a mature and brave nineteen-year-old.

At the beginning of the book, the family discovers that the Archduke of Austria has been assassinated, setting off the events that will eventually lead to war. Rilla, however, is more preoccupied with her first real dance, and her future with her crush, Ken. At the dance, though, the group discovers that war has been declared, and many of the young men talk about joining up. As Rilla's oldest brother Jem and his friend Jerry leave for war, others struggle with whether or not to join up such as Ken, who has an old sports injury, and Walter, RIlla's favorite brother. In the end, both of these boys also enlist.

On the home front, Rilla joins her mother in contributing to the war effort by starting a chapter of the Junior Red Cross. Shortly into her work, she discovers an abandoned baby, whose mother has died and whose father is off at the front. Initially disliking babies, Rilla "adopts" the young boy, naming him Jims, and spends her time trying to properly raise him. She simultaneously keeps working for the war cause, organizing recitations and concerts, and selling war bonds. Day to day life goes on: the antics of the family's housekeeper, Susan, are particularly noted, as she becomes a fierce patriot and is proposed to by a noted pacifist, who she rudely refuses. At the same time, the family pets play a large role in the book, as a two-sided cat has bad and good moods, and Jem's dog waits patiently at the train station for the full four years.

When Walter dies abroad, the family is heartbroken and even more scared when their youngest son, Shirley, also joins. Rilla was particularly close to Walter and takes the news very hard. In the meantime, she receives letters from Ken, who stopped by her home on his way to war and kissed her, giving her the idea that they are more or less engaged. As the war goes on, though, his letters become less and less romantic.

In the end, Jem is wounded and lost in battle, but eventually makes his way home. Ken comes home as well. Jims' father returns, with a new and capable English wife, and Jims has been left an inheritance by a neighbor, ensuring his future. Ken comes for Rilla and the book ends on the implied promise that they will spend the rest of their lives together.

More summaries and resources for teaching or studying Rilla of Ingleside.