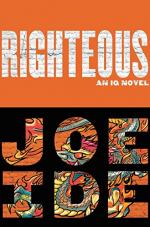 Joe Ide
This Study Guide consists of approximately 65 pages of chapter summaries, quotes, character analysis, themes, and more - everything you need to sharpen your knowledge of Righteous.

This detailed literature summary also contains Quotes and a Free Quiz on Righteous (An IQ Novel) by Joe Ide.

Isaiah’s brother, Marcus, was killed in a hit-and-run accident in Joe Ide’s previous novel, IQ. This novel, Righteous, begins eight years later with Isaiah finding the car that killed Marcus. After the accident, Isaiah looked for the killer, but then stopped. Finding the car makes him restart his investigation. After studying photos of the contents of the car, he realizes that the hit-and-run everyone thought was an accident was, in reality, a hit. Isaiah's search for who issued the hit and killed Marcus leads him to Frankie, the former leader of a gang called the Locos, and a money launderer, Seb Habimana.

During this period of time, Isaiah gets a call from Sarita, the woman Marcus dated at the time of his death. She hires Isaiah to discover the truth behind what is going on in the life of her half-sister, Janine, who is a gambling addict. Janine has contacted Sarita because she is in trouble. Janine and her gambling addicted boyfriend, Benny, owe a lone shark, Leo, money and cannot pay him. Sarita does not know whether Janine needs help, or whether she has invented a story to get more gambling funds. Isaiah does not take payments for the cases he works on, but when Sarita offers to pay him, he says that he will give the money to his partner, Dodson. Isaiah tells Dodson about the case. Dodson’s girlfriend, Cherise, is pregnant, and he is reluctant to leave her until Isaiah tells him about the money. With the baby coming, Dodson can use it. He agrees to help Isaiah.

By the time Isaiah and Dodson reach Janine in Las Vegas, the situation is even worse. Janine tells them that she downloaded information from her father’s computer with the intent of stealing the identity of one of his rich clients in order to get the money she and Benny need. In doing so, she discovered that her father, Ken, works for a human trafficker of girls. When she told Benny, he stole the drive containing the records and ran away. Janine, Isaiah, and Dodson search for Benny. Meanwhile Benny has gotten himself and Janine into more trouble by demanding a ransom for the return of the drive. Ken’s boss, Tommy, learns about Benny’s activities before Ken does and goes to Ken’s to try to find Janine. Ken attempts to fight Tommy, but fails. Benny also fails to escape Tommy’s men who are members of the Red Poles.

The Red Poles hold both Ken and Benny captive in a massage parlor. Tommy still wants Janine, however. He knows that Isaiah and Dodson sent her to stay with Deronda, Dodson’s partner in the food truck business, in an effort to protect her. Tommy’s contacts in the area belong to the Chink Mob and they receive orders to get Janine. On the way there, the two men charged with the job, Wing and Gerald, stop to get something to eat. While they are there, Frankie’s sister, Ramona, comes in looking for a girl she has just lost a fight with. When she sees Gerald and Wing, she starts a fight. In spite of Wing’s warnings to walk away, Gerald pushes Ramona down. She vows to get even with them. They leave and she follows them.

Wing and Gerald fail to get Janine because Deronda realizes they are there, and she shoots at them. Ramona arrives as they are escaping and Gerald kills her. Manzo, the man who now leads the Locos tells Frankie that Ramona had texted him before her death saying that she was going to take care of members of the Chink Mob who were in their territory. Frankie gets the gang together and they go to avenge her death, but fail to find the people they are looking for. Manzo does not agree with their actions, but does not say so.

Back is Las Vegas, Isaiah has used his powers of deduction to determine the location of Benny and Ken. He and Dodson do not have guns, but before sending Janine away, he made her give him her cell phone. So, in an effort to create a distraction, he texts Leo from her cell phone. The message gives Leo Benny’s location and tells him that Benny has his money, but refuses to pay him. Leo and his henchman, Zar, go to the massage parlor. They assault the mama-sahn in order to get in. Once inside, Leo finds himself face-to-face with Skinny, the member of the Red Poles who was in charge of getting Benny and is waiting for orders to kill Benny and Ken. There is a shootout and the members of the Red Poles, Leo and Zar, die. Isaiah and Dodson rescue Ken and Benny.

Isaiah, Dodson, Ken, and Benny are going to meet Deronda and Janine in East Long Beach when Dodson receives a text revealing that Tommy’s men have kidnapped Cherise. Tommy wants to exchange Cherise for Janine, Ken, and Benny. Dodson agrees. During the reunion with Deronda and Janine, Dodson tells everyone to get in the food truck. Isaiah realizes that Tommy is holding Cherise hostage and devises a plan. The group goes to meet Tommy’s men as planned, but instead of Janine, Ken, and Benny coming out of the food truck, Fankie, Manzo, and the members of the Locos come out. A gun fight follows. Frankie dies happy. Manzo is glad the members of the Locos got the fight out of their system. Cherise gains her freedom.

Afterwards, Dodson’s and Cherise’s baby is born. Its middle name is Isaiah. Isaiah realizes that Sarita sees him as Marcus’ little brother and not as a romantic partner. At the end of the narrative, he shows interest in a girl he met at TK’s wrecking yard named Grace and he trains his dog, Ruffin. He also realizes that Seb killed Marcus because he was jealous of him as Seb also wants to date Sarita. Isaiah gets revenge by making Seb believe that Sarita told him how much she hates Seb. Isaiah also discovers that Marcus did rob and shoot Frankie and finds the money. He gives the money away to people he knows who need it. Finally, he considers growing his business, and making Dodson his official partner.

More summaries and resources for teaching or studying Righteous (An IQ Novel).