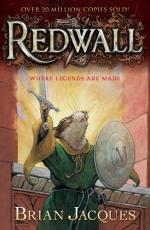 Brian Jacques
This Study Guide consists of approximately 58 pages of chapter summaries, quotes, character analysis, themes, and more - everything you need to sharpen your knowledge of Redwall.

This detailed literature summary also contains Topics for Discussion and a Free Quiz on Redwall by Brian Jacques.

Redwall by Brian Jacques pits a horde of savage rats against the peace-loving mice of Redwall Abbey and the flock of woodland refugees whom the mice take in. Novice Matthias searches for the lost Sword of Martin the Warrior to save the day.

Redwall by Brian Jacques opens with a joyous celebration of Abbot Mortimer's jubilee. Creatures from the surrounding woods attend. The clumsy young novice Matthias is accompanying guests home when a wagon full of savage-looking rats careens by. Led by Cluny the Scourge, this Horde takes over abandoned St. Ninian's Church down the road and makes plans to take over Redwall Abbey. Threatened woodland creatures who accept sanctuary all offer their distinctive services to the common defense. Matthias shows promise as a military leader, much like the legendary Martin the Warrior, whose picture the rats steal from the Abbey. The bare spot on the wall where it had hung reveals clues to the whereabouts of Martin's Sword.

Advised by elderly Brother Methuselah, Matthias begins a quest for the legendary weapon. Cluny, meanwhile, tries a variety of approaches to conquer the Abbey by force, but one-by-one these are turned back. Matthias is briefly held prisoner under the roof eaves by ferocious sparrows who nest there, led by King Bull Sparra. There Matthias picks up additional clues about the sword. Escaping death, Matthias sneaks out of the Abbey to follow the sword, and thus misses most of the siege. He is befriended by a troop of quarrelsome shrews and advised by a cat and owl at an abandoned Farm not to dare to enter the sandstone quarry where Asmodeus, a dreaded giant adder, has hidden the Sword. With Martin's inspiration, Matthias finds the trophy, beheads the snake, and races back to the Abbey, hoping that he is not too late.

Backed by a huge relief army of sparrows and shrews, Matthias arrives after Cluny has by trickery gotten inside and is at the point of executing the inhabitants. In the midst of a great battle, Matthias and Cluny fight to the death. Cluny is the stronger and is close to overpowering Matthias, but Matthias leaps away and cuts the rope holding up the Abbey's great Joseph Bell. It crushes the evil rat leader. Abbot Mortimer, however, has been mortally wounded. His dying order is that Matthias become the Abbey's permanent Champion and marry Cornflower, with whom he is in love. A year after the so-called Late Rose Summer Wars, the Abbey holds another celebration of the restoration of peace and prosperity.

More summaries and resources for teaching or studying Redwall.