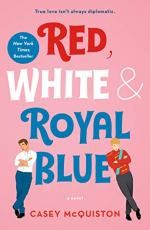 Casey McQuiston
This Study Guide consists of approximately 68 pages of chapter summaries, quotes, character analysis, themes, and more - everything you need to sharpen your knowledge of Red, White & Royal Blue.

Alex Claremont-Diaz is the First Son of the United States, living in the White House while he finishes his political science degree at Georgetown. Along with his sister June and their best friend Nora Holleran, the Vice-President's granddaughter and Alex's ex-girlfriend, the three form the White House Trio, a name given by media to their constant presence in the media's eyes as they party and promote the White House through different events. June, having finished her degree in journalism, continues to live in the White House to keep an eye on Alex, and they often spend their time together making fun of the media's coverage of them. Alex also has a nemesis, Prince Henry of Wales, who he considers to be rude and overbearing, along with not possessing a personality. They encounter each other at Prince Phillip's wedding, Henry's older brother, and Alex takes umbrage with how Henry does not pay June enough attention when they dance. Alex drunkenly confronts Henry, leading to a physical push-and-pull that leads to them destroying the wedding cake.

Once home, Alex is confronted by Zahra, his mother Ellen's vice chief of staff, over the diplomatic and public relations crisis he has initiated. To rectify the situation, Alex is forced to fly to England and begin a faux friendship with Henry that can be promoted in the media. Once there, Alex meets Shaan, Henry's handler, who has him sign multiple non-disclosure agreements. Alex and Henry do various media events where they talk about their friendship, which Alex despises. However, he also gets to see a more authentic and kind version of Henry while interacting with children in a sick ward. They are further entangled in a broom closet during a false bomb alert, and Alex learns more about Henry's vulnerable side. Before he leaves, Alex, seeing that him and Henry are in a similar situation, gives the latter his number. They both casually begin to text one another, gradually developing a rapport.

Meanwhile, Alex is keeping a close eye on his mother's forthcoming election against Jeffrey Richards, the right-wing Senator from Utah. He spends a lot of time in the House and Senate buildings, trying to glean information from various people due to the relationships he has developed over the course of his parents' political careers. Alex visits Rafael Luna, the independent Senator from Colorado, who is his father's, Senator Oscar Diaz of California's protege. Alex has a strong relationship with Rafael built on time spent together during the latter's campaign as a gay nominee for the Senate. Alex keeps an eye on Richards' tactics, as he is rumored to want an independent senator for vice-president so as to attract the moderate vote. Noticing Alex's astute political skills, his mother Ellen offers him a job on the campaign that he is to begin after graduation. While Alex is ecstatic, June is not when offered a job on the campaign, and refuses the offer due to not wanting to embark on the political path. Alex has always wanted to follow in his parents' footsteps, and hopes to be in Congress by the time he is 30.

On Thanksgiving, Alex's parents get into an argument over Ellen's reelection campaign, prompting an outburst from Alex, who then calls Henry to vent his feelings. Alex invites Henry to a New Year's party hosted by the White House Trio, and Henry brings his best friend, philanthropist Percy "Pez" Okonjo, with him. June and Nora are surprised to see the friendship between Alex and Henry, but Alex is surprised when Henry kisses him in the White House garden. Henry does not respond to Alex's texts after that night, while Alex turns to Nora for advice on the matter since she is bisexual. She reveals that she always knew Henry was gay, and that Alex should explore his feelings. Alex also contacts Liam, his friend from high school with whom he had sexual experiences that he did not understand at the time. Liam is surprised to hear from Alex and does not offer an answer for Alex over his sexual orientation. Alex confronts Henry at a state dinner for Phillip organized at the White House, and they spend time together, becoming intimate. After that, Alex and Henry begin to spend more and more time together, travelling to see each other at various events while also exchanging intimate emails with one another.

During a fundraiser arranged by Pez in LA, Alex, along with Nora, June, and Bea, spend time together as a group. At the end of the night, Alex and Henry have sex for the first time. Henry even invites Alex to the Royal Box at Wimbledon, where Phillip's condescending attitude towards his younger brother prompts the two to leave the event. After Claremont campaign is stunned by Luna being selected as Richards' vice-presidential nominee, Alex is comforted by a surprise visit from Henry. They spend the night together, letting their guard down and are caught by Zahra, who warns Alex of the dangers of their relationship. Alex tells his mother about being bisexual and seeing Henry, prompting a response of support and mindfulness from Ellen, but is also told he has lost his job on the campaign.

Alex, along with June and Nora, goes to Texas to their father's ranch for July 4th. Alex invites Henry as well, with his father intuiting their relationship and showing his support. While swimming at night in the pool, Alex declares his love to Henry, who seems to not respond accordingly and leaves early in the morning. Alex is distraught, and eventually uses Zahra's help to confront Henry in London. Henry reveals his hesitation to engage in their relationship due to the expectations of being a royal, but agrees to pursue their relationship after a night together. Alex returns home to the tumults of the campaign, thinking diligently and strategically about finally turning Texas, his home state, Democratic. Henry reveals that Phillip was not supportive when he reveals his sexuality. Meanwhile, the media begins to speculate about Alex and Henry after finding leaked photos of them in an elevator. Addressing the situation, Alex goes on a date with Nora in a public fashion, while Henry does something similar with June. Even after this, more intimate photographs of Henry and Alex and released to the press, along with the intimate emails between the two. Both are distraught, and while Alex has his mother's full support, Henry is under pressure from Phillip and his grandmother the Queen to lie about the situation. Zahra arranges a meeting with the Queen, revealing that she is able to do so due to being engaged with Shaan. While there, the Queen hints that Henry should cast doubt on the rumors and blame it on technological manipulation. However, with his mother's support, Henry is able to stand up to his grandmother while they see the outpouring of support from around the world for the couple. Alex and Henry then publicly come out as a couple, with Alex calling for people to support and accept his decision.

The presidential campaign receives a bombshell when Nora receives a file dump showing that the Richards campaign hired hackers to access the emails between Henry and Alex, while also hiring a private investigator to photograph the two covertly. Alex deduces a code from the correspondence and figures out it was sent by Rafael Luna. Ellen promises him immunity in the event of a criminal investigation and he eventually withdraws his vice-presidential nomination. Rafael reveals to Alex that, as a young intern for Richards, the senator had tried to solicit sex from him, and when rebuffed, threatened the young man's family. Rafael signed up to the campaign so as to keep an eye on any misconduct, and eventually was able to find the surveillance on Alex. With his LSAT results in hand, Alex begins to plan for law school, thinking of going to NYU when Henry talks about having bought a brownstone in Brooklyn so as to be close to a queer youth shelter that is part of his new foundation. On Election Night, everyone gathers in Austin, with Alex hoping that Texas finally turns blue. After a few close calls, Ellen's victory comes to depend on winning Texas, which she eventually does. In celebration, Alex and Henry leave the celebration and travel to the former's childhood home, finally showing Henry the place where he grew up to become who he is.