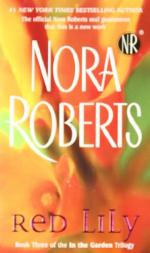 Nora Roberts
This Study Guide consists of approximately 29 pages of chapter summaries, quotes, character analysis, themes, and more - everything you need to sharpen your knowledge of Red Lily.

This detailed literature summary also contains Topics for Discussion and a Free Quiz on Red Lily by Nora Roberts.

"Red Lily: In the Garden Trilogy" by Christopher McDougall is the the story of a ghost that haunts a house until it is avenged.

Hayley is a single mother who has found herself in a wonderful situation. She lives with a very distant cousin and friends in the beautiful Harper House. Hayley feels very fortunate to have her friends in her life because they give her the opportunity to work at the nursery and they help her take care of her daughter. They are like family to her.

Harper House is a beautiful old house, but it is haunted by a ghost. The ghost, Amelia Connor, is drawn to the children in the house. Hayley sees her when the ghost comes to sing to Lily. Amelia isn't always pleasant. Sometimes she is scary and harmful to the adults, but she would never harm the children.

Hayley is very attracted to Harper, the son of her friend Roz. Her daughter loves the man as well. She visits with him one evening and kisses him. As she walks home, Hayley become uncharacteristically angry and snaps at her daughter. She feels horrible about it later and doesn't know what came over her. Back in the carriage house where Harper lives, he is dreaming about kissing Hayley when the ghost trashes his kitchen.

Soon it becomes apparent to everyone that Amelia is possessing Hayley. She says mean and spiteful things. Hayley tries to fight back mentally, but sometimes she catches glimpses of the ghost. They know she has to be put to rest, but they don't know how or even who she really is.

Harper and Hayley become even closer, and they realize that they are in love. He buys her a bracelet she is drawn to. Through a series of events, they discover that the bracelet once belonged to Amelia. As their love grows, Amelia becomes more aggressive. She appears with a blade and rope and flings Harper into a wall. She also gets into Hayley's head, encouraging her to steal from her friends.

Hayley fights back with the help of her friends. They remind her that she is strong and Harper is strong, too. Roz tells Hayley that she feels fortunate to be able to watch her son fall in love with someone she, herself, loves. She reminds Hayley that Harper was there, holding her hand when Lily was born. Hayley is very moody and learns that she is pregnant. Harper proposes to her, and they begin to plan their wedding. The growing relationship between the two sets Amelia off, and Hayley gets more frequent glimpses into Amelia's life. She is finally put to rest in the family graveyard.

They know they need to find Amelia's missing body so they can put her to rest. Together they go to the old nursery and Hayley is possessed by Amelia. She learns that the woman had tried to hang her baby son as well as herself, but a nursemaid saved the child. As death surrounds her, Amelia floats into a dark and cold space. When Hayley tells the others about this, Harper realizes that it's probably the pond. He dives down, searching for her and finds her.

More summaries and resources for teaching or studying Red Lily.