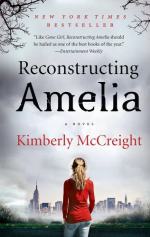 Amelia communicates a great deal through text messages on her cellphone. Most important about these texts is a relationship that Amelia has developed with a boy named Ben, whom she has never met. This boy turns out to be Amelia’s biological father, Jeremy.

Like most teenagers, Amelia has a strong social site presence. Among these is her Facebook page on which she often posts her status through simple comments and quotes from her favorite author, Virginia Woolf. Comments on this page seem to indicate Amelia’s popularity, or lack thereof, among her classmates.