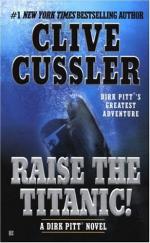 This detailed literature summary also contains Topics for Discussion on Raise the Titanic! by Clive Cussler.

The mystery of the Titanic has always fascinated people and Dirk Pitt is no different. After a massive search operation, the sunken ship is found. Clive Cussler, like millions of other people, wanted to see the sunken ship raised and brought into harbor. Pitt, like the others, is excited about the Titanic. The costs of raising the Titanic would be astronomical. So just finding the ship was cause for excitement for many.

Cussler spins a suspenseful novel about the sunken luxury liner. This is his fourth underwater adventure and it is a good one. The hero, Dirk Pitt, works for the National Underwater and Marine Agency and is a James Bond type character. The book involves international intrigue and cold war style espionage as the Americans and Russians vie for a rare element, byzanium, that they believe is hidden in the cargo hold of the Titanic.

There is suspense from the beginning of the book to the end. The book opens with a passenger on the Titanic who is sick in his stateroom. He finds that the ship is sinking. Instead of trying to save himself, he orders at gunpoint a crewman, John Bigalow, to take him to the vault. When they arrive there, the passenger tells Bigalow to go topside and save himself and then walks into the vault, closing the door behind him. Bigalow survives the disaster.

A rare element, byzanium was removed from Russia by a team of miners known as the Coloradans. It is the only element that can be used in a vital defense system. The Americans send a man in to survey the area, he finds an old abandoned and concealed mine site with traces of the element, but it has been mined and is missing. He also finds some other things, like a body, an old Colorado newspapers, and old mining equipment that was manufactured in Colorado. This begins the race to find the missing mineral. There is some indication that the missing byzanium was in the cargo hold of the Titanic which results in a secretly funded operation to salvage the ship as the Russians sit and watch. The suspense thickens as the salvage operations take place, leading to the exciting conclusion of the novel.

Cussler specializes in writing underwater adventures centering around sunken ships. He writes in clear everyday English, explaining any technical terms that are used. The reader feels the suspense at the beginning of the book and it continues to build throughout the book. It is a hard book to put down once the reader begins. The book has all of the intrigue of any cold war spy type novel.

The book is well worth reading.