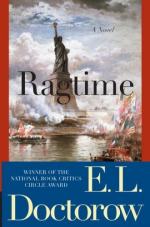 E. L. Doctorow
This Study Guide consists of approximately 35 pages of chapter summaries, quotes, character analysis, themes, and more - everything you need to sharpen your knowledge of Ragtime.

The novel begins in 1902 with the story of a wealthy upper-middle class family—Father, Mother, the little boy, and Mother’s Younger Brother—living in New Rochelle, a town just outside of New York City. Mother’s Brother is in love with Evelyn Nesbit, a former chorus girl and artist’s model, whose husband Harry K. Thaw is charged with the murder of her ex-lover, architect Stanford White. Famed escape artist Harry Houdini’s car breaks down in front of the house one day and he subsequently pays the family a visit. Father prepares for and leaves on a trip to the Arctic with explorer Robert E. Peary.

Tateh and the little girl travel to Lawrence, Massachusetts, where Tateh finds work in a textile mill. However, a mill strike nearly separates the two permanently. They continue their travels and land in Philadelphia, Pennsylvania. Tateh, an artist, sells movie books (flip books) he has invented to a novelty store owner for a considerable sum. Tateh and his daughter return to Lawrence and settle into a comfortable life. Pioneers of industry J.P. Morgan and Henry Ford meet to discuss theology and technology.

Back at the house in New Rochelle, Coalhouse Walker, Jr.—an African-American jazz piano player—begins to court Sarah. Sarah refuses to see him yet he continues to visit until she agrees not only to see him, but to accept his marriage proposal. One day, as Coalhouse drives from New Rochelle back to New York City, the volunteers of the Emerald Isle Firehouse—led by Chief Willie Conklin—block his path and demand a toll. While Coalhouse seeks police help, the firefighters destroy his car. When Coalhouse complains, he is arrested. Coalhouse uses the funds originally intended for his wedding to Sarah to secure a lawyer; however, no lawyer will take his case. One night, desperate to help, Sarah leaves the house to ask Mr. Taft’s Vice-President for help petitioning the federal government on Coalhouse’s behalf. However, she is mistaken for an attacker and is struck very hard in the chest by Secret Service men. She becomes ill and eventually dies. Lost in grief, Coalhouse fixates on the injustice done to him, and retaliates by blowing up the Emerald Isle Firehouse, killing four volunteers in the process. Father and Mother’s Younger Brother fight over the incident, and Mother’s Younger Brother leaves the house and family to join Coalhouse Walker, Jr. and his group of disgruntled youth. Under increasing scrutiny, Father, Mother, and the little boy flee with Sarah’s baby to Atlantic City, New Jersey. Mother and Father meet Tateh, who has re-fashioned himself as a motion picture director, while in Atlantic City.

Willie Conklin faces pressure to leave town or give into Coalhouse Walker’s demands as Coalhouse and his gang continue to blow up firehouses across the city. Coalhouse and his gang break into J.P. Morgan’s library and hold it hostage as they continue to make demands. District Attorney Charles T. Whitman calls Coalhouse to negotiate; Coalhouse reiterates his demands: his car must be restored to full working order and Willie Conklin must die. Booker T. Washington attempts to persuade Coalhouse to give himself over to the authorities but Coalhouse refuses to do so until his demands are met. Finally, Father returns from Atlantic City and is able to convince authorities to concede to Coalhouse’s demand. The District Attorney delivers the Model T and forces Conklin to restore it in the street where Coalhouse can see. When the restoration is complete, Coalhouse’s gangs, including Mother’s Younger Brother, make their escape in the car. Coalhouse surrenders, and is shot down in the street by a firing squad. Mother’s Younger Brother drives around the country in Coalhouse’s Model T and subsequently to Mexico, where he joins revolutionary forces and eventually dies.

J.P. Morgan travels to Egypt to see the pyramids in an attempt to restore his spirituality. However he fails, his health begins to decline, and he dies. Archduke Franz Ferdinand and Countess Sophie are assassinated. As tension in Europe increases and WWI approaches, Father becomes involved in war preparations. He dies when the Lusitania is struck and sinks with him on board. Tateh and Mother marry and raise the little boy, the little girl, and Sarah’s son as their own. Emma Goldman is deported and Evelyn Nesbit fades into obscurity as she ages. Her former husband, Harry Kendall Shaw, is released from the insane asylum and marches in the Armistice parade.

More summaries and resources for teaching or studying Ragtime.