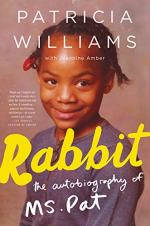 Patricia Williams
This Study Guide consists of approximately 43 pages of chapter summaries, quotes, character analysis, themes, and more - everything you need to sharpen your knowledge of Rabbit.

The following version of the book was used to create this study guide: Williams, Patricia with Jeannine Amber. Rabbit: The Autobiography of Ms. Pat. Dey St., 2017. Amazon Kindle Ebook.

In the present day, Patricia Williams is a suburban wife, mother, and successful standup comic. However, it was a long and difficult road for her to arrive in this place and to live this lifestyle. Born into extreme poverty and raised by an alcoholic single mother, Patricia grew up in inner-city Atlanta and had a childhood in which hunger, abuse (physical, emotional, and sexual), and illegal activities were common. Patricia gets pregnant at thirteen by her twenty-year-old boyfriend, Derrick. By the age of fifteen, Patricia is a single mother with two young children, has dropped out of school, and has no way to support herself or her children. She decides to start dealing crack-cocaine.

It is the late 1980s and crack seems to be everywhere. Dealing drugs is a dangerous way to make a living, and Patricia fears for her safety. Eventually, she establishes a successful and relatively safe way of doing business with the help of her friend Duck. Patricia is soon flush with cash and has taken in other young girls, supporting them and creating the happy home and family she has always dreamed of. However, despite her newfound financial security, Patricia's life is still full of dangers and risks. She has narrow escapes from the law, and is shot more than once. Eventually, she does get arrested and spends a year in prison.

While in prison, Patricia makes plans to get her GED and turn her life around, but Derrick's influence soon convinces her that she is not good enough for anything legitimate and she returns to dealing crack. Patricia's abusive relationship lasts for seven years before, with the advice of a new father-figure in her life named Hubert Hood, she finally cuts him out of her life for good. Not long after, Patricia meets a new man named Michael; they start a relationship and move in together. Michael encourages Patricia to pursue a legitimate career, but it is a long time before Patricia finally decides to stop dealing drugs. However, even after quitting the drug business, she still turns to illegal ways of making money and starts a check scam. In the meantime, she and Michael get custody of Patricia's sister's children when DFCAS takes them away from her sister. This initially causes strife between Michael and Patricia, but they work it out and stay together.

Finally, after much persistence on Michael's part, Patricia decides to get an education and pursue a legitimate career. With the help of a social worker and President Clinton's Welfare-to-Work program, Patricia gets her GED and becomes a certified medical assistant. However, after spending time and money getting that accreditation, she quickly learns that her criminal record will make it impossible for her to get a career in that field. Instead, she eventually gets a job with Michael at General Motors and the couple builds a happy family and life together, eventually moving to the suburbs of Indianapolis.

Patricia has succeeded in turning her life around, and her daughter becomes the first person in their family to graduate high school. However, Patricia's nieces are eventually returned to their mother's custody and they fall into the same traps of pregnancy, addiction, and poverty that have plagued most of Patricia's family. Patricia tries to help them; she refuses to give up on them or the idea that a person can be anything and do anything, if only they remember to dream. At the end of the book, Patricia starts doing stand-up comedy, telling jokes about her life, and eventually, she becomes quite successful and well known. Looking back on her journey, Patricia realizes that her story is a testament to the power of love.

More summaries and resources for teaching or studying Rabbit: Autobiography of Ms. Pat.