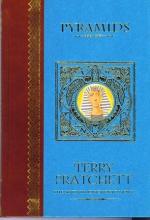 Pyramids: The Book of Going Forth Summary & Study Guide

Terry Pratchett
This Study Guide consists of approximately 36 pages of chapter summaries, quotes, character analysis, themes, and more - everything you need to sharpen your knowledge of Pyramids.

Pyramids: The Book of Going Forth Summary & Study Guide Description

Pyramids: The Book of Going Forth Summary & Study Guide includes comprehensive information and analysis to help you understand the book. This study guide contains the following sections:

This detailed literature summary also contains Topics for Discussion and a Free Quiz on Pyramids: The Book of Going Forth by Terry Pratchett.

Pyramids, by Terry Pratchett, depicts the life of a young pharaoh's struggle to change his home and save it from another dimension. Through the course of the story he will become an assassin, a king, and then leave to find his own way.

Teppic is the son of the pharaoh, and when he is twelve years old he leaves home, Djelibeybi, to go to assassin school in Ankh-Morpork. He finishes his final exam seven years later. On the day he graduates, he suddenly knows that his father has died. Teppic's father, being the pharaoh and therefore half god, was responsible for making the sun come up everyday. There was an eclipse and before the sun came out again, the pharaoh jumped over the ledge to his death, thinking that he had failed his people. Shortly after landing on his head and dying, he realizes that the sun was coming out again but now no one can hear him, and he has to wait for a pyramid to be built before his soul can leave.

Teppic returns home with ideas that are much different from those that are tradition in Djelibeybi. The high priest, Dios, has run everything in the kingdom for longer than anyone can remember and ignores most everything that Teppic says. Teppic knows that his father doesn't want to be in a pyramid but has construction on the largest pyramid ever started while in an argument with Dios. While Teppic is residing over the courts, a young girl is brought in and Dios sentences her to death because those are the customs of the people, even though Teppic had pardoned her. Teppic slips into his assassin gear and breaks the girl, Ptraci, out of her cell that night.

Dios knows that Teppic is the one that set the girl free. When Teppic tries to get her out of the city, Dios has Teppic and the girl surrounded by guards and announces that they will be fed to the sacred crocodiles. The giant pyramid that Teppic had ordered built has begun sucking up time around the city. The study of geometry reveals that the pyramids hold great power but the littler ones don't cause that much trouble. The pyramid begins to erupt and Teppic and Ptraci escape on a camel named You Bastard, who happens to be the best mathematician in the world. You Bastard gets them free of the city before the giant pyramid takes it to another dimension.

Teppic fells responsible for the kingdom and takes You Bastard back to the city, since the camel is the only one smart enough to get there. Everything that people believe begin to come to life in this dimension. The people of Djelibeybi believe in many gods that have all suddenly appeared and all the dead in the city have begun to walk around demanding that the pyramids be destroyed. Teppic is able to destroy the largest pyramid, and several camels, all great mathematicians, get the city back to where it was supposed to be. Dios is taken back in time with no memory of what happened. He starts all over again advising the very first pharaoh of Djelibeybi. Teppic discovers that Ptraci is his half sister, and he resigns as king and leaves her the kingdom. Ptraci is able to start the kingdom toward change that it had not seen since it began.

Pyramids: The Book of Going Forth from BookRags. (c)2022 BookRags, Inc. All rights reserved.