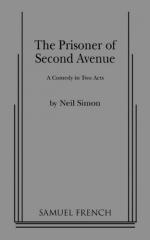 Neil Simon
This Study Guide consists of approximately 21 pages of chapter summaries, quotes, character analysis, themes, and more - everything you need to sharpen your knowledge of The Prisoner of Second Avenue.

In Simon's romantic comedy Barefoot in the Park (1963), a young man and woman, whom the author claims are the younger version of Mel and Edna, struggle to cope with life in New York as they learn to adapt to each other's personality and temperament.

Simon's autobiographical Chapter Two (1977) explores the pain a middle-aged New Yorker experiences after the death of his wife and the guilt he feels when he remarries soon after. That guilt causes major problems in his new relationship.

New York: An Illustrated History, by Ric Burns, James Sanders, and Lisa Ades, was published in 2003 as a companion to Burns's popular PBS series. The authors supplement a comprehensive social and political history of the city with photographs, paintings, and newspaper headlines.

More summaries and resources for teaching or studying The Prisoner of Second Avenue.

The Prisoner of Second Avenue from BookRags. (c)2022 BookRags, Inc. All rights reserved.