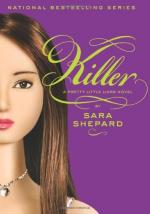 Sara Shepard
This Study Guide consists of approximately 21 pages of chapter summaries, quotes, character analysis, themes, and more - everything you need to sharpen your knowledge of Pretty Little Liars #6.

"Pretty Little Liars: Killer" is the story of a group of teenagers who are forced to solve the mystery behind their friend Ali's death. The narrative begins with a collective memory of the day that all five girls met, when four of them (Emily, Hanna, Spencer, and Aria) try to steal Ali's piece of a school flag. However, they find out that it has already been stolen. After Ali's death, in the present day, the girls think that they've seen the body of Ian, the wrongfully-accused suspect in the murder, in the woods. However, they return to find the body has disappeared.

Meanwhile, each girl has her own personal issues to deal with, while they continue to get harassing texts and emails from "A," an anonymous source. Aria has moved in with her father and his young, pregnant girlfriend, after her mother's boyfriend started to harass her. Emily is bisexual and dating a boy, whose mother has it in for her. Meanwhile, Hanna's stepsister Kate is trying to take over her life, and they both compete for the same boy, Mike (Aria's younger brother). Finally, Spencer's parents have been very cold to her, and she has come to believe that she is adopted, finally tracking her birth mother down to a woman in New York City, who wants to meet her.

Aria also begins a romance with Ali's brother, Jason, who is strange but handsome. He bolts, however, when Aria invites him to a gallery opening at a former home for disturbed boys, which is now a hotel. Meanwhile, Emily's romance with Isaac is tested when they have sex and his mother possibly overhears them, and later threatens Emily. At first, he refuses to believe her, but later confronts his mother and finds out Emily was telling the truth. At the same time, Spencer, using her sister's computer, gets messages from Ian, confirming that he is still alive. She is preoccupied with Olivia, her birth mother, whom she met in New York, and who wants her to move there too. After calling Olivia's realtor, though, Spencer discovers that the whole thing was a hoax, and that all of her college money has been taken.

On the night of the gallery opening, everything comes to a head, and the girls realize separately various elements that together lead them to realize that a police officer, Officer Wilden and Jason must have murdered Ali together. Once Ian confirms this over the computer, though, someone tries to set fire to the woods and the girls. In the fallout, when everyone is safe, the girls realize that someone has joined them: Ali.