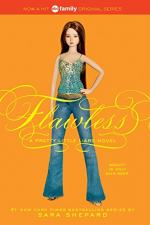 Sara Shepard
This Study Guide consists of approximately 44 pages of chapter summaries, quotes, character analysis, themes, and more - everything you need to sharpen your knowledge of Pretty Little Liars #2.

The following version of this book was used to create the guide: Shepard, Sara. Pretty Little Liars: Flawless. HarperCollins Ebooks, 2007.

The second book in the Pretty Little Liars series begins with a prologue that is told in the omniscient third person perspective. The prologue takes place four years prior to the narrative present, during April of sixth grade, just a couple of months before Alison DiLaurentis was murdered. She and her four best friends (Aria, Spencer, Hanna, and Emily) were having a slumber party and trying on different outfits. They looked outside and saw Toby Cavanaugh, a creepy neighbor boy, spying on them. Alison insisted that they ought to get revenge, and the other girls reluctantly agreed. Alison went outside and set off a firework and it caught Toby’s treehouse on fire. He and his step sister Jenna were inside, and she was blinded. Alison told the girls everything would be okay, and the next day Toby confessed to setting off the firework. He was sent to boarding school, and Jenna went to a school for the blind.

The rest of the novel is told in alternating chapters that focus on one of the four main characters’ perspectives. The first chapter began where the last book ended, with the girls outside Alison’s funeral, reeling from the realization that they have all been getting harassing texts from A, and frightened by the reappearance of Toby and Jenna, who have returned to Rosewood for the funeral. The girls decided to go to a park and talk things over in private. On the way over, Spencer felt guilty because she knew more than the other girls. The night of the fire, she had seen Toby confronting Alison because he had seen her light the firework. Alison had blackmailed him into taking the blame by threatening to reveal seeing something he had done to Jenna. At the park, the girls decided to keep in contact about A, but at the end of the chapter they all left, and Spencer got a text from A about keeping her information about Toby a secret from her friends.

Hanna left the park with her best friend, Mona, and the girls talked about Foxy, the biggest charity ball in Rosewood. Hanna’s boyfriend Sean had broken up with her the week before, after she had tried to sleep with him, and she did not want to go to the dance without him, but she also wanted everyone to think that she had broken up with him. She went home and found her father, who she had not seen in years, waiting for her. He was there because she had been getting in trouble and her mother had called him. Emily went to the Gray Horse Inn where Maya was staying. Last week, the two girls had kissed, but Emily was frightened of her feelings and did not want to admit to being gay. She went upstairs with Maya, and the girls kissed again, but then Emily got a threatening text from A and she ran away, telling Maya they could only be friends.

Aria went home and discovered her parents were in a fight. Aria knew that her father had had an affair when she was in sixth grade. The whole family had been living in Iceland since Alison’s disappearance, and they had gotten along wonderfully, but back home things were falling apart. Aria and her brother Mike went out together and snuck into a bar. They had fun, until they spotted their father with his old mistress, Meredith, on a date. Spencer went home and got an email from Wren, Melissa’s ex-boyfriend. Spencer had kissed him last week, and her family had found out about it and emotionally disowned her. Spencer ignored the message and went downstairs to try and apologize again to her sister, Melissa, but it was helpless.

As a punishment for stealing Sean’s car and crashing it, Hanna had to go volunteer at his father’s burn clinic after school the next day. She tried to call Sean, but he would not answer her. While cleaning the rooms, she found some prescription pills in a cabinet and stole them. Emily went to swim practice and tried to quit the team, but her coach made her captain and she decided to stay. Her ex-boyfriend Ben, who caught her kissing Maya the week before, attacked Emily in the locker room. Toby, who was swimming for a rival team, chased Ben off.

Aria drove her brother to lacrosse practice, and on her way home her car broke down. She started having a panic attack, but then Sean showed up and gave her a ride. Spencer found out that her parents had cut off her credit cards, and got so angry that she decided to go to Wren’s house. Hanna could not get ahold of Sean, so she went to the abstinence club he was a member of and talked to him there. They got along well, and she asked him to save her a dance at Foxy. Emily ran into Toby and fell off her bike, then fainted from the blood. Toby carried her to his car and gave her a ride home, and Emily started to suspect that she might have feelings for him.

Spencer slept with Wren, and then the next morning, to cast of Melissa’s suspicions, invited Andrew Campbell to Foxy with her. Emily kissed Toby at their swim meet, and liked it. She decided to ask him to Foxy. Hanna’s father came over again, but this time he wanted to talk to her and invite her to Philadelphia over the weekend. Even though Foxy was on the same night, Hanna agreed to go. She went to Sean’s soccer game and told him that she was not going to the dance, and he said that he was not, either. Aria and Sean went out together, and he convinced her to confront Meredith, and then invited her to Foxy. Spencer stole one of Melissa’s old econ papers so that she could go out with Wren. Officer Wilden, the cop in charge of the murder investigation, came to ask Spencer about Alison, and Spencer did not tell him her suspicions about Toby.

Emily went to Foxy with Toby, but she could not stop thinking about Maya. Hanna went to see her father, but was disappointed when he invited his wife and stepdaughter, Kate and Isabel. A sent Hanna a text, telling her that Sean was at Foxy with another girl, and Kate encouraged Hanna to sneak away to deal with the situation. Hanna gave her the prescription pills she had found, and then left. Spencer went to Foxy with Andrew, but spent the whole night trying to call Wren, who was not answering his phone. She saw Emily and Toby together and got frightened. Aria and Sean took a break from Foxy to talk in his car, and ended up kissing.

Hanna arrived and confronted Aria and Sean, and then ran into the bathroom to throw up. Spencer forced Aria and Hanna to make up so that they could team up and find Emily, and Spencer told that what she suspected about Toby. Emily and Toby left the dance and he gave her a ride home. He stopped the car and started saying things that made her nervous, and then Emily got out of his car and ran home through a cornfield. Spencer called her at home and warned her about Toby, and when he showed up at Emily’s house, she accused him of murdering Alison and he ran away. Hanna went back to her father’s hotel, but Kate had told on her and shown him the pills. Hanna had to leave with her mother and go home.

Spencer called Wren the next morning and he broke up with her because he was seeing someone else. Melissa came into Spencer’s room and told her that an anonymous person had told her that Spencer was seeing Wren, and that Melissa had been with him all weekend when he was not answering his phone. Officer Wilden stayed the night with Hanna’s mother, and in the morning Hanna told him that Toby was the murderer, but Wilden said that he had an alibi.

A call came over his radio, saying that a body had been found in the woods by Emily’s house. Aria woke up and found out that her mother had received an anonymous note that told her about her husband’s affair, and that Aria had known about it. The girls all went to Emily’s house and discovered that Toby had killed himself in the woods. Jenna came up to them and gave Emily the note he had written, which did not make sense. Spencer finally came clean and explained that he had been molesting Jenna the night of the fire. The girls all apologized to Jenna, and hoped that since Toby was dead, A was gone, too. But, when Emily went up to her room, she got a text from A.