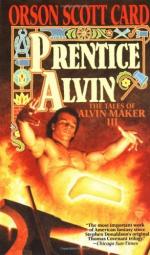 Orson Scott Card
This Study Guide consists of approximately 36 pages of chapter summaries, quotes, character analysis, themes, and more - everything you need to sharpen your knowledge of Prentice Alvin.

This detailed literature summary also contains Topics for Discussion and a Free Quiz on Prentice Alvin by Orson Scott Card.

Prentice Alvin, by Orson Scott Card, takes place in an alternate America, in a world in which each race has its own type of magic. In the early 1800s, young Alvin apprentices to be a blacksmith, while trying to learn how to become a fabled Maker, who has godlike powers.

Cavil Planter is a slave owner whose wife is too sick to bear children. Cavil receives a vision of a man whom he thinks is Jesus Christ. The visitor tells Cavil to have children with his slave women, and send them out into the world. From that day on, Cavil rapes all of his female slaves, fathering as many children with them as possible. His first son is born to a young African princess, who uses her voodoo magic to turn into a blackbird and fly away with the baby. The enchantment nearly kills her, but she is determined to get her baby out of slavery.

Peggy Guester is a torch, or psychic, and she has mentally watched over Alvin ever since the day he was born in her parents' inn. Now Peggy worries that she will end up unhappily married to Alvin, without him loving her back. Peggy's family rescues the helpless slave girl, who dies shortly afterward. Peggy's parents adopt the boy, making up a story about his parentage. Peggy goes to live with Mistress Modesty. After Peggy has learned how to truly value her own inner beauty, she goes to university, so that she can teach Alvin everything he needs to become a Maker. This is a challenge, because Makers are the stuff of legend, and have not been seen in a thousand years.

The Guesters name the slave's baby Arthur Stuart, after the king of America in this fictional reality. As Arthur grows, he becomes close friends with Alvin, and the child is very smart. When he is seven years old, and Alvin's apprenticeship is nearly over, a teacher arrives to teach them. It is Peggy, in disguise, so that the town will not constantly pester her for psychic advice. Peggy teaches Alvin about the world and scientific theory, and he begins to understand how to be a Maker. He has a dream of building a utopian Crystal City. Eventually Cavil Planter tracks down Arthur, who is legally his property as a slave. The slave Finders use magic to track the boy's genetic signature, so Alvin comes after them and takes Arthur, then magically changes Arthur's genes so that he will not be recognizable to the Finders. When they come looking for him, Alvin kills one of them, so he must flee with Arthur to his hometown of Vigor Church. There, he teaches his brother the magic that allows him to create a living plow made of gold. Alvin dreams of the day when he will marry Peggy and build the Crystal City.

More summaries and resources for teaching or studying Prentice Alvin.