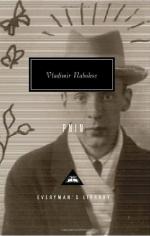 Vladimir Nabokov
This Study Guide consists of approximately 30 pages of chapter summaries, quotes, character analysis, themes, and more - everything you need to sharpen your knowledge of Pnin.

This detailed literature summary also contains Topics for Discussion and a Free Quiz on Pnin by Vladimir Nabokov.

Timofey Pnin is a Russian immigrant teaching Russian at a Waindell, a small college in the northeastern United States. Despite his inoffensive and quiet existence, he is regularly victimized by the thoughtlessness and even hatred of others towards him, most of all his manipulative ex-wife, Liza. He winds up losing his job at Waindell and is forced to leave the one place he was ever comfortable living.

As the story opens, Pnin is on a train, believing that he is heading toward Cremona to deliver a lecture at a lady's club. Unfortunately, he planned his trip using an outdated train schedule and is headed in the completely wrong direction. At the advice of the train's conductor, he gets off and tries to catch a bus to his destination. However, he winds up spending too much time eating and misses it. To make his situation even worse, he believes, momentarily, that he lost his bag and has a seizure, a not uncommon occurrence for him which is related to a heart condition he had since he was a young child in Russia. However, all turns out well and he manages to ride with two men who were already headed in the direction of Cremona. As he delivers his speech, he feels the same pride he felt when reciting poetry in front of hi school as a child.

Pnin is constantly moving, never able to find a place that meets his very strict requirements. The most important of these requirements is quiet; he finds it difficult to focus in a noisy environment and yet noise seems to follow him wherever he goes. He moves in with the Laurence and Joan Clement. Laurence is a professor at Waindell College who, though he does not know Pnin particularly well, nonetheless harbors a strong distaste for him. This distaste fades, however, as he gets to know Pnin and recognizes that they are not altogether different. While Pnin is staying with the Clementses, his ex-wife, Liza, visits him. She was the love of his life when they first met in Paris decades ago but she left him for a psychiatrist named Dr. Eric Wind.

When she was seven months pregnant with her only child, Victor, she pretended that she wanted to come back to Pnin—news he welcomed with enthusiasm—but discovered that it was nothing more than a ruse to have him pay for her passage to America; she had no intentions of leaving Dr. Wind. However, when she visits him now, her situation with Dr. Wind is genuinely troubled and she tells him that she plans to leave him for another man, an Englishman named George Church. However, since she has difficulty caring for Victor, she asks him to set aside a certain amount of money for him each month and he, a slave to her every wish, agrees. He winds up meeting Victor as a result and developing a friendship with him. Pnin stays with the Clementses for over a year but is forced to leave when Isabel, their daughter, returns and reclaims her old room.

Pnin goes to a gathering of Russian immigrants in a secluded area known as The Pines. It is the first time Pnin has gone, but he is familiar with several of the people there, including his good friend Chateau (who, despite is French name, is of pure Russian blood) and a woman named Roza Shpolyanski, whose family Pnin knew very well when he lived in Russia. One of her cousins, a woman named Mira, was killed in a Nazi concentration camp during World War II, a fact with which Pnin was familiar but which he also tried to repress, for it seemed unbearable to acknowledge that the world he lives in is one where such a senseless, horrific act of violence is possible.

As the fall semester begins again at Waindell, Pnin immediately gets back into his routines. The semester actually starts out quite well for him; he has few students and, as a result, plenty of time to dedicate to his own research projects. However, unknown to him, the termination of his job is already in the works. His employment at the school was never really justified by the courses he taught: In the Cold War years, interest in Russian language, culture, and literature was at a low point. He was only able to keep his job due to the diligence of Professor Hagen, the head of the German department. Unfortunately, Hagen is offered a post at a more prestigious university and will be leaving. His successor is not at all well-disposed towards Pnin, nor are the heads of the other departments. Pnin's firing, then, is inevitable. He is forced to relay this news to Pnin after the latter throws a house-warming party: He has finally found a place that he likes to a live, a secluded, quiet house he has all to himself. He even plans to buy it, but those plans are obliterated when he discovers he will be losing his job. As it turns out, the man who will be replacing him is the narrator of the story, a man who knew Pnin back in Russia but whom Pnin, for some undisclosed reason, completely despises. As the story closes, the narrator is at the house of the head of Waindell's English department who is entertaining his guests with mean-spirited imitations of Pnin. The narrator steps outside and sees Pnin drive by and unsuccessfully tries to get his attention.

More summaries and resources for teaching or studying Pnin.