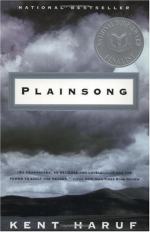 Kent Haruf
This Study Guide consists of approximately 41 pages of chapter summaries, quotes, character analysis, themes, and more - everything you need to sharpen your knowledge of Plainsong.

This detailed literature summary also contains Topics for Discussion and a Free Quiz on Plainsong by Kent Haruf.

Set in the expansive high plains of eastern Colorado, the novel Plainsong tells tales of multiple characters, all of whom face major changes. Each of these characters will first have to learn to accept the change, and then each will help and be helped by others. In many ways Plainsong is a novel about how people must help and rely on each other.

Tom Guthrie tries his best to continue life as usual despite his wife's increasingly isolationist behavior. She spends all of her time alone in a darkened guest bedroom. Tom does not know what to do about her depression, and it is unclear, after having to endure it for so long, how much even wants to help. His young sons, Ike and Bobby, are the real victims. They miss their mother and find her behavior confusing.

Victoria Roubideaux enters the novel already experiencing what most would consider an awful and lonely life. She is seventeen years old with few or no friends. Her mother is verbally abusive. Victoria has had one boyfriend in her entire life, and he disappeared weeks ago. She is pregnant, and when her mother discovers this, she locks Victoria out of the house. With nowhere else to turn, Victoria seeks help from a teacher, Maggie Jones.

Maggie Jones is facing her own problems. She is trying to take care of her elderly and senile father, and for some time she has been attracted to a fellow teacher, Tom Guthrie. Guthrie might now be romantically available, but Maggie does not yet know if he is interested in her or if she wants to introduce a new complication to her life. Maggie does the best she can to both help Victoria and take care of her father. When balancing both tasks become impossible, she seeks the help of two elderly brothers who live on a ranch far outside of town.

The McPheron brothers have never married and have lived their entire lives on their ranch seventeen miles from the nearest town. The only life they have ever known has revolved around each other and their farming and ranching. The brothers' parents died when they were in their teens, and though the brothers are well liked by many local characters, they have formed no close relationships. It is with these two brothers that Maggie suggests that Victoria might find a home.

Ike and Bobby do the best they can at trying to understand their abruptly altered home life. First their mother secludes herself in a room, and then she moves out entirely. After some time at a rented house in town, their mother moves far away to Denver. Unlike other characters, the boys have little control over their lives, and they have even less understanding of why adults so drastically alter the security they once knew.

In order to cope with the obstacles in their lives, the main characters all have to turn to each other for support. Each character helps another and is helped. While Plainsong is a story about isolation, both physical and emotional, it is also a story about community

More summaries and resources for teaching or studying Plainsong.