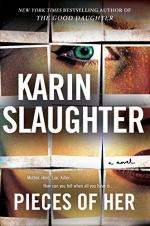 Pieces of Her Summary & Study Guide

Karin Slaughter
This Study Guide consists of approximately 78 pages of chapter summaries, quotes, character analysis, themes, and more - everything you need to sharpen your knowledge of Pieces of Her.

Pieces of Her Summary & Study Guide includes comprehensive information and analysis to help you understand the book. This study guide contains the following sections:

This detailed literature summary also contains Quotes and a Free Quiz on Pieces of Her by Karin Slaughter.

The following version of the novel was used to create this study guide: Slaughter, Karin. Pieces of Her. William Morrow, August 21, 2018. Kindle.

Pieces of Her by Karin Slaughter tells the story of the love, strength, and forgiveness after a daughter learned that her mother had kept hidden significant pieces of her life. Andrea “Andy” Oliver’s life changed after she and her mother, Laura, witnessed a pair of horrific murders while celebrating Andy’s birthday at a popular restaurant. Laura had confronted the shooter in a way that Andy never believed her mother would be able to do. Afterward, Laura ordered Andy to move out of her house that night, an order that not only forced Andy to grow up but also set in motion Andy’s desire to find out exactly what her mother was hiding from her.

The novel opens in 2018 as Laura and Andy are celebrating Andy’s 31st birthday. A mentally ill man, Jonah Helsinger, came into the restaurant with a gun. He shot and killed his former girlfriend and her mother. Laura confronted the boy. In the course of the confrontation, Helsinger pulled a knife on Laura. She was able to keep him from killing her with the knife by putting her hand up to block the blade. She hit Helsinger in the neck with the knife and then appeared to intentionally kill him when she pulled the blade through the front of his neck. It was later determined that Laura had told the boy to be still so she could pull the blade straight out, but he stepped backward, causing the knife to kill him.

After Laura’s wounds were treated, she insisted on being taken straight home. She told Andy that she had to move out, that night. Instead of obeying her mother, Andy fell asleep in her apartment. When she awoke later that night she interrupted a man torturing her mother. Andy killed the man by hitting him in the head with an iron skillet. Fearing that Andy would be put in prison for murder, Laura gave Andy instructions to go to a storage facility that Laura had prepared. She told Andy to go to Idaho and stay there until Laura called her and told her it was safe to return. When Andy reached the storage facility, she discovered her mother had prepared in case she ever needed to run away. Inside the unit were a car and some clothes as well as a good deal of cash. Andy also found pictures of her mother that showed she had at one point in her life suffered a severe beating. Another set of pictures showed Andy as a toddler standing in the snow. Andy had no knowledge of ever having lived anywhere there had been snow. She decided instead of going to Idaho, to find out exactly what her mother was keeping from her.

At this point, the novel goes back in time to 1986 when Martin Queller, president of the Queller Corporation was murdered while taking part in a panel discussion during the Global Finance and Business Consortium in Oslo. The murder was arranged by the Army of the Changing World, a cult group that included Martin’s children, and carried out by Laura Juneau. Laura’s husband had been refused treatment by Queller’s group homes at which point he went home killed his three children and seriously injured Laura. The cult group was led by Nicholas “Nick” Harp, a man who seduced Jane Queller, Martin’s daughter with his charisma.

The reader soon understands that Jane is the younger version of Laura, Andy’s mother. She worked her entire childhood under the critical eye of her father to become a world-renowned pianist. Her father raped her, beat her, and belittled her throughout her childhood. Nick gave her a chance to escape her father’s cruelty but Jane was deeply involved in Nick’s cult before she realized what was happening. Nick abused and manipulated her in order to keep her and the other members of the cult doing what he wanted.

Until Jane saw that people were getting killed, like her father and Dr. Alexandria Maplecroft, a professor the group kidnapped and held for ransom, Jane believed that the group would be able to do some good by taking a stand against her father’s fraudulent company. She soon realized that Nick wanted power and glory more than he really wanted to change the world. Jane could take no more of Nick’s abuse when she learned that her brother, Andrew, was dying of AIDS and would not go to the hospital because of Nick. Nick gave Jane an ultimatum, she could either take care of her brother, or she could stay with Nick. Jane chose Andrew though Nick almost killed her as a result of her decision. Jane took Andrew to the hospital and then confessed to her crimes as part of the Army of the Changing World. Her confession came in time to stop other members of the group from detonating a bomb in New York City.

The novel switches back and forth between Andy and her journey to discover her mother’s past, and the story of Jane’s time with Nick. It was at the same farmhouse near Chicago where Jane chose to take care of her brother instead of staying with Nick that Andy realized her mother was a member of a cult as well as a concert pianist in her past life. Andy was shot and taken hostage by Paula Kunde, Laura’s nemesis in the cult and the woman who had sent the man to torture Laura. Laura came to her daughter’s rescue to discover that Andy had matured and evolved during their time apart giving Andy the strength of mind to help her mother overpower Paula.

More summaries and resources for teaching or studying Pieces of Her.

Pieces of Her from BookRags. (c)2022 BookRags, Inc. All rights reserved.